Formula Art: Artist David Johnson Switches from the Circuit to the Road With Latest Cycling Piece

David Johnson has spent the best part of 20 years pursuing his passion for art and motorsport, marrying the two together with immaculate, vibrant palette knife paintings.

His work has taken him to extraordinary places, from working with Formula One legends Jackie Stewart, Sir Stirling Moss and Lando Norris, to holding live art exhibitions at the British Grand Prix, MotoGP and the Grand Prix Ball amongst others. What started out as two separate passions has now blossomed into a renowned artistic career.

David’s passions go beyond the track however, and his latest piece depicts his first ever cycling-orientated artwork; a bustling peloton in exquisite detail, but with an eruption of colour in the backdrop that captures the intensity of professional road cycling. 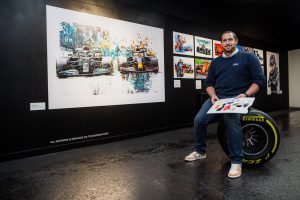 Having produced motor sport related art for some time, what was the thought process behind switching to cycling for this piece?

Before becoming a full time artist, I was a teacher for fifteen years. My connection with cycling began when joining a group of staff that would once a week go mountain biking in and around Oxford. As I developed my skills and confidence, the desire to push further saw me and others in the group take on bigger challengers and later enter several endurance events (including Mountain Mayhem).

My fascination with the sport enticed me to buy a road bike. It was my first duathlon at Silverstone that had me hooked. As an avid follower of Formula One, to be on the track of the British Grand Prix was a dream come true, but matching that with the faster speeds, getting a tow and taking racing lines gave such a buzz. You could feel the adrenaline take over from the drive and excitement of the race.

Unfortunately, when cycling to work one morning, as always, I was fully prepped, and followed the same route day-in-day-out. When cycling on a roundabout a lorry joined too fast and connected with me. Luckily after surgery I was in one piece. I did, at the time, step away from cycling.

Alongside teaching I was creating artwork of motorsport’s finest. This gained the attention of drivers including Sir Stirling Moss and Sir Jackie Stewart. I found the demand for me, and my artwork grew to a point that I needed to go at this full time. When painting any image, I always strive to capture the excitement, speed, and energy of the race.

One day at Silverstone for the British Grand Prix I was live painting alongside my exhibition and greeted by a spectator (Terry Musson). He spoke about his passion for road cycling. This brought back many fun and thrilling emotions from my days on the bike. I realised that what I endeavour to capture on canvas is the same as the emotions I had on the bike. Terry could see this connection and commissioned a painting, for what was to be my first time switching from motor sport to cycling.

The process didn’t just rekindle memories gained from being on the bike but has also seen me back on the hills. 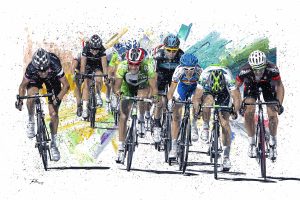 Can you go into a bit more detail about the process itself – how long did it take, what tools did you use etc?

The painting was created using acrylic paints applied with just a palette knife. This impasto technique builds texture into the piece and the acrylic provides a vibrant finish. I first started my career using fine art brushes to capture every detail. I later transferred to the palette knife as it provided a fresh, modern look, giving more freedom to the painting and is a lot of fun.

The relief seen through every splatter and stroke of the palette knife builds energy and movement. Relinquishing the focus on detail in earlier work I endeavour to build this into every piece. This timely process sees me working in layers, that once dried can be sculpted and cut with a scalpel, working from the background to the foreground, adding definition.

Do you have plans to branch further out into road cycling? I know you have exhibited art at events such as the British Grand Prix before, is this something you’d also do within the cycling world?

There is no better connection to a painting than working with a driver/rider and live painting at an event. This has previously seen me at many events, but nothing compares to being at the circuit. I now hold a regular exhibition at Silverstone’s British Grand Prix and have a permanent display at the circuit’s museum.

After the enjoyment of creating my latest cycling piece I want to get closer to the action to fuel future works and connect with the riders and teams. This initial painting shows the connection with the key elements of road cycling, capturing a moment in time from this beautiful sport.

You can find out more about David’s previous breathtaking work in motorsport by clicking this link.