While many Britons will seek to travel to unforgiving mountainous regions such as the Alps and the Pyrenees, there are places here at home that present just as much of a challenge, with equally breathtaking scenery.

There are hairpin bends in Britain that sweep every bit as gloriously as anything in France and Italy, from the rolling hills of the Lakes to Scotland’s wild and wonderful Highlands, there are spots that will truly test your power and endurance.

With this in mind, let’s take a look at some of the most infamous climbs this island has to offer.

Hardknott Pass has often been coined as England’s hardest climb, with a truly gut wrenching 33% gradient in places. Situated between Eskdale and the Duddon Valley in the Lake District, it is astonishing that anyone even attempted to tarmac such an unforgiving and remote mountain pass.

Great rolling hills blanketed with lush vegetation surround you as you tackle the 2.2km cycle, which on the face of it, doesn’t sound like a long way. However, anyone who as attempted it will tell you different – you’re immediately at a 25% gradient for the first few hundred metres into the climb, and while it does flatten out to just 8% in some places, the constant changing dynamic of the gradient will keep your body and legs guessing.

Next on the list is the Trough of Bowland, which historically marked the county boundary between Lancashire and the West Riding of Yorkshire.

At 295m at its highest point and almost 1000ft above sea level, the valley pass sits in an Area of Outstanding Natural Beauty, making it a truly sumptuous climb.

Do not be fooled though, Sir Bradley Wiggins prepared for his Olympic and Tour de France wins here. He once said ‘It’s my favourite place to ride in the UK, there are a lot of testing climbs and very little traffic.’ Due to its position just outside the Lake District, it is a perfect hill climb for those looking to get away from busy roads and constant flows of cars and walkers.

The climb itself sees riders climb 130m in around 2km. The average gradient is 6% and the max gradient is 15-16%. Luckily, the first section is a gentle introduction, with several smaller inclines at 5%.

The second half is where the legs start to burn, as 8% becomes the average. The next 400 metres form the toughest part of the climb but also the most beautiful – there are some astonishing views once you can see over the other side and the road starts to plateau.

Arguably amongst the toughest climbs in the whole of the UK, you are going to want to strap in for this next one.

The Bealach na Ba is the closest thing to an alpine pass on this list – it’s 17.86km (11.1 miles) long, running east-west from Tornapress to Applecross, and is a single track road all the up. 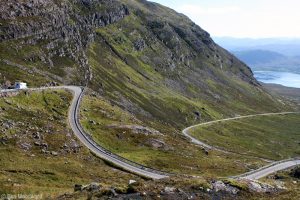 It offers views of distant islands and mountains before delivering you to a couple of hairpins that are immediately going to test your resolve. With expansive views of the West Highlands, it can get a little busier in the summer months, but choose your time wisely, and you may have a relatively clean shot at the 8km from sea level to 623m. Aside from this, cyclists have hailed it as the Switzerland of the UK, with breathtaking hairpins, changeable weather conditions from the bottom to the top, as well as very few potholes.

While it is certainly not for the faint hearted, the climb is steady and gradual, with very little variation in the middle segments. You can plan which parts to pay attention to the most, but bare in mind that the final ascent reaches gradients in excess of 10%, so plan your efforts accordingly.