Sustrans, a walking and cycling charity who are the custodians of the National Cycle Network (NCN), have launched an ambitious effort to boost links between towns and villages by a significant figure.

The project would focus initially on settlements of 10,000 people or more, and would aim to make travel easier for wheelchair users in the process. All the while it would improve on, and grow the existing 12,786-mile network to try and provide greater coverage up and down the nation.

It would seem the ultimate goal of the plan, which also happens to be why it is so ambitious, it to make more of the NCN traffic and barrier-free. As it stands, Sustrans owns just 2% of the entire route, of which is comprised mostly of public roads – this means just a third of the network is traffic-free.

Xavier Brice, Sustrans’ CEO, told The Guardian : “The idea of the National Cycle Network isn’t to, for example, replace the need for fully segregated high-volume cycle lanes in cities and towns, or to replace the need for neighbourhoods that are pleasant and easy to move around without a car. This is a strategic arterial core network. 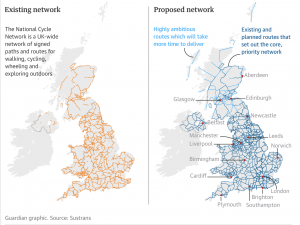 The prospective map draws straight lines between settlements of 10,000 or more people, including reconnecting missing sections and poorly kept paths. The next milestone, which they hope to achieve by 2023, is to establish  a strategy for every mile of the network – including identifying new traffic-free sections and creating “quiet ways” on existing roads.

Despite the positive progress towards plans for an updated network, there are concerns that at the current rate of progress Sustrans, will complete 416 miles of improvements by 2023, and has removed just 315 of 16,000 barriers – the goal of a barrier-free network could take another 150 years.

Brice went on to say how the removing of barriers is a large undertaking, but key to the success of making the pathways accessible for everyone. On average, 800 fences and chicanes need to be removed per year to meet a barrier-less target of 2040.

“In an ideal world, we’d just get the angle grinders and remove them all … people will often believe that they’re there for good reason.

“The fundamental point that we mustn’t lose sight of is: these barriers are discriminatory; they discriminate against wheelchairs, and mobility scooters and adapted trikes, people out with buggies, and therefore they need to go.”