What does it need to make a Cycling Adventure in Spain of 1,300 km and 11 days possible? Well, 3 crazy guys, 3 bikes, a tent and a lust for adventure.

Sooooo, with my age already beginning with the number 3, I finally realised my wish of travelling by bike. My friends did it a few times in the past, but I always had the misfortune of not being able to join (bike crash 1 week before departure date, being on a different travel trip, etc.).

The whole trip was quite a coincidence and happened rather spontaneously, but that’s how I usually do stuff. While being back “home” in Slovenia for the Easter holiday’s, I met with a friend (Klemen) for coffee and it turned out he and another friend (Domen) had just booked tickets to go to Spain for a biking trip. They asked if I had the time to join them. Well, as luck would have it, I had quite a lot of overtime/vacation days to use, so I agreed to join.

You might be wondering, why only 3 days to get to Granada and then 7 days to get back. Well, the weather forced our hand a bit as it was predicted that on Friday, 6.5.2016, the Sierra Nevada mountains would have acceptable weather conditions. We decided it would be the best day to take on the mighty Veleta climb. Yet, as it happens sometimes, the forecast was naturally wrong.

We were planning to mostly sleep in a tent, with the exception of Granada, where we booked an apartment in order to be able to leave most of our stuff behind when climbing Veleta. The “famous” cold and rainy Spanish weather would force our hand in spending two more nights in apartments along the way.

Furthermore, we decided that rather than find official camps, we would just find a nice little spot along the road and make it our “hotel room” for the night. We made sure not to leave any trash behind (sometimes, we even took more with us, when we left) and that we would avoid private property. In addition, we figured that the odds of our bikes being stolen were higher in an official camp, as opposed to a remote place in a forest, where no one usually goes.

Although we made efforts to travel as light as possible, we made a conscious decision to each pack a “luxury” item – something non-essential but nice to have. With that in mind, Domen took a wok pan and a coffee maker (can’t start a day without some good old coffee), Klemen took three glasses (made of glass, because, who wants to drink from a plastic cup) and I took three plates (made of plastic – I know, what a loser).

We never used the plates and two glasses suffered a tragic accident and did not make it home. Other than that, we only took the bare minimum of clothes, bike repair tools and spare parts. Oh yes, and some sleeping equipment (tent, inflatable mattress and sleeping bags).

The distance measured (in km) was an educated guess since none of us had the “bike computer” and we sometimes did not take the optimal route, which ended up in some extra km… For the full article click here or get the print version 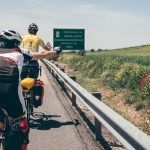 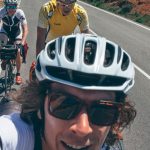 Sonja and Jerry
We are a couple, trying to stay healthy in a world full of stress, pressure, competition and unhealthy food. Huh, that’s a bit negative, right? Let’s start again. We are a couple, dreaming of a life with purpose and deep meaning.
www.myhammocktime.com