Cycling the Stunning Eastern Coasts of France and Spain

With autumn knocking at the door we’ve racked our brains to provide some inspiration for those looking to get away this October.

Starting on the French Riviera in the ancient Greek port city of Marseille and finishing in the cosmopolitan metropolis of Cataluña, Barcelona, this route will take you through some of the best kept secrets in Europe.

Marseille to the Camargue Wetlands

Average temperatures in Marseille during October can still reach highs of over 20 degrees Celsius, so before setting off it is worth exploring France’s second largest city.

Explore the mazy labyrinth of Le Marché de Capucins to find the most sumptuous Mediterranean treats, or experience some of the rich history of the ancient fishing port near the Romaneque Byzantine Notre-Dame de la Garde Basicila. There is a lot to take in so it recommended to spend at least a night in Marseille before heading off anywhere; it is a vibrant, gastronomic and ethnic melting pot that is unapologetically rough around the edges, but it offers a array of delights if you look hard enough. 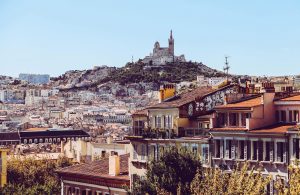 When leaving the city try taking the bus and drive for just over an hour to Porte-Saint-Luis-du-Rhone where there is a short Rhone river ferry crossing. It is here where exploring on two wheels can commence, into the peaceful lowlands of the Rhone delta alongside dikes and saltwater lakes. This follows closely to the coastline until you reach Saintes Maries de la Mer where after a 30km ride, you can take a rest for the night.

Continuing on through the Camargue region, it is a haven for wild birds so keep your eyes peeled for a flamboyance of flamingos dancing on the saltwater flats. This 320 square miles of nature reserve is among the most untouched and protected areas in Europe – a perfect place to saunter along and unwind.

Along the way you can find the incredibly well preserved medieval city walls of Aigues Mortes, which looks like it was taken directly from a Game of Thrones scene. You can end the days cycling in Villeneuve-les-Maguelone, which boasts a breathtaking coastline and a typically French 12th century church.

Hop on the train to the ancient port city of Sete, famous for its enclosed saltwater lake which yields the most delicious oysters and mussels, which can be sampled in the quaint portside bistros.

Leaving the Camargue region, head towards Bezier along the quiet back roads and a stretch of the famous 17th century Canal du Midi. The day’s trek ends in Bezier, famed for its incredibly rich tapestry of middle-age massacres and bloody battles, where you can get on a train (1hr 30mins) to the medieval port town of Collioure. This striking coastal town has a backdrop of the Pyrenees, and sits around a quiet Mediterranean bay. It is known for the impressive Chateau Royal de Collioure which commands the waterfront, and is dotted with perfectly preserved medieval holdings.

Cycling inland toward the Banyuls Pass, this part of the ride marks the border between France and Spain. The first few kilometres or so require some longer climbs, but it is worth it for the rolling countryside views.

A perfect stop off for the first night in Spain is Figueres, a quiet town just north of Girona where you can sample your first taste of Cataluña and its exceptional cuisine.

The next morning is spent winding through the Emporda region, home to great dipping hills and vast stretches of fruitful vineyards. Empuries is an absolute must stop-off point; it boasts some of the most well-kept remains of ancient Greek settlements in Europe, and excavations are still ongoing making it one of the most important archaeological sites in Spain.

The final stretch of the journey takes us through the low hills of Cataluña’s coastline, passing through more medieval town of Peratallada and La Bisbal, which are certainly worth taking a short break and exploring.

The port town of Palamos concludes the cycling if you so wish; it has an incredible beach and fantastic bars along the waterfront, which can be soaked up before heading to the final destination, Barcelona, by bus or car;

And so, we arrive at the final point of the trip, Cataluña’s capital. There are few cities that completely blow you away in every aspect, but Barcelona is certainly one of them. Home to some of the best food in Spain, incredible weather nearly all year round and Europe’s largest football stadium, there is a lot to cover so if you can find the time, stretch out your stay just a few days more.

Although it doesn’t feel as authentically Spanish as the southern tip of the country, it has its own unique vibrancy. It is an absolute must for lovers of art; everywhere you turn there are weird and wonderful sculptures and interesting building tops, all inspired by famed artist and former inhabitant Antonio Gaudi. 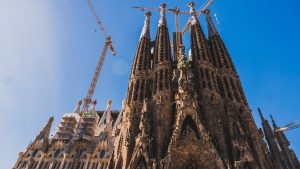 The La Sagrada Familia is the one thing any tourist must do if they are visiting – a profound personal experience despite the many people around you, the interior is just as mind-boggling as the intricately sculpted exterior, which one fails to comprehend just how they were able to construct it in such a way back in the late 1800s. Interestingly, the cathedral is still under construction to this day, underlining the sheer scale of its magnificence.

The city is also a cyclist paradise, with wide sprawling roads and a long coastline; it is the perfect way to get around and explore.

Chile Offers Cyclists an Array of Splendours Chile is certainly an under-appreciated gem amongst the natural crown that is South America. Unique in its…