Looking Across The Continent at Europe’s Push for Cycling

With the pandemic still very much a part of our lives, avoiding busy crowds and public transportation, as well as simply increasing one’s daily exercise or picking up a new hobby has seen the demand for bikes reach an unprecedented level.

This, coupled with the intensifying conversation surrounding the environment and climate change, has lead to a cycling revolution across Europe with organisations and governments working hard to improve infrastructure for those on two wheels.

Particular attention has been paid to busy urban landscapes and major cities across the continent, and the coronavirus pandemic has only accelerated this funding process, with Finland (€7.76 per-person), Italy (€5.04 per-person) and France (€4.91 per-person) leading the way in allocating these resources.

We’ll be taking a look at some of these initiatives, and what it means for the world of cycling.

Lifting the Smog Over Milan

Despite Italy’s second-most populous city possessing a compact 15km city centre, with well-paved, wide roads, it has long had a problem with car ownership. In fact, Milan has one of the highest rates of car ownership in Europe and this is reflected in its infrastructure, which has been designed to accommodate the heavy daily traffic.

However, when covid struck, traffic decreased by around 75 per cent and Milan’s famous smog lifted as a result, prompting a new wave of greener thinking.

The initiative has been dubbed ‘Strade Aperte’ (Open Roads), a project to reinvent Milan’s busiest streets into bike-friendly routes, encourage cycling across the city, and help tackle Milan’s long-established pollution trouble. Over the last year, nearly 35km of new cycling lanes have been implemented across the city, including another 25km of ‘cycle friendly’ areas, such as safer 30km speed limit zones for cars.

This has not only boosted cycling tourism as a result, but the Milanese have seized the opportunity to make use of the city’s redevelopment; bikes accounted for 25 per cent of all vehicles on Corso Buenos Aires, one of Milan’s busiest roads, which is said to be a significant increase, according to Urban Planning and Public Space Design at AMAT, Milan’s mobility agency.

Brussels, the Belgian capital, have begun installing an additional 40km of cycle paths across the city, as well 3,000 bike racks capable of housing at least 6,000 more bikes in a €550,000 cycling-focused overhaul of the urban landscape.

Not only this, but as of May 2020, the entire city centre of Brussels turned into a 20km/h zone with pedestrians and cyclists allowed to use the full width of the road and given full priority, thus helping to promote safer cycling in a bid to persuade inhabitants to switch to two wheels.

Further afield, Liege will also introduce a similar initiative, starting with a general 30km/h zone and 35km of road will prioritise pedestrians and cyclists over cars.

Paris alone has been afforded the opportunity to  to create 650km of cycle paths. Furthermore,  the Île-de-France region pledged financial support for the pre-existing RER Vélo project, a network of nine isolated cycleways connecting the centre of Paris with sprawling suburbs, a concept of the Ile-de-France Bike Collective advocacy network. 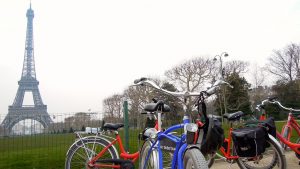 €300million was provided to part-pay for a mix of new infrastructure – this included 116 towns and cities where temporary cycleways were developed for the duration of the coronavirus lockdown, and were thus met with great success. This also included the installation of thousands of new bike parking spaces across the entirety of the country.

One thing seems to be clear; cities are slowly becoming more cycle friendly, and as a result, more friendly to the environment which can only be viewed as a positive thing. While these are just some of the initiatives taken, 34 of the EU’s 94 largest cities have announced they have taken some form of action. Indeed, more than €1 billion has been spent on cycling infrastructure across Europe since the outbreak of Covid-19, highlighting that despite the disruption is has caused to our daily lives, there is always a silver lining.