A First for Female Adventure Cycling

Last week on the 24th September, the first adventure cycling collective exclusively for women in Europe set off in the northern city of Turin in Italy, with the route ending some 700km away on the south coast of France in Nice.

Supported and organised by Komoot, which offers an intuitive planning and navigation tool for touring cyclists, the group is made up of 20 riders from seven different countries. There is no competitive element; rather, each participant is free to tackle the route at their own pace and alongside who they wish, embodying the meaning of adventure cycling.

It passes through old military cols and scenic historical trade routes leading all the way from the western Italian Alpes down to the coast of southern France, offering some of the most breathtaking off-road cycle paths in Europe. 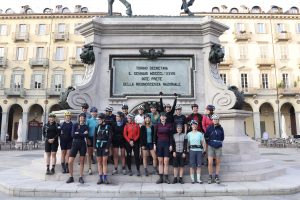 With backpacking and adventure cycling picking up in popularity to avoid increasingly busy roads, there has been a particularly large uptake by female cyclists according to Komoot. Ambassador and world-renowned endurance cyclist Lael Wilcox will lead the collective, and speaking about the trip, she said; “I’ve been told that it’s impossible for women to ride long distances, to climb mountains, to ride through the remote countryside. Yet I’ve done all of these things and so have many women that are joining on this week-long adventure.

“I’m very motivated to show that women are extremely capable in the world of ultra-distance cycling and this event is a way for us to connect with each other and to share our stories and our passion for adventure cycling.”

Gaby Thompson, the Global Community Manager at Komoot says; “We want adventure cycling to be accessible to everyone, to transcend genders and nationalities. The experience of riding the Turin-Nice route in a group of women will be history in the making in itself! We’re super excited to be able to support Lael in bringing this to the international bikepacking community this year.”

The route, which was originally designed by James Olsen in 2016, was partially damaged by a violent storm last year and has been carefully fine-tuned again to construct a challenging yet rewarding route for those who wish to tackle it. It that winds through the Queyras and Mercantour national parks and the Ligurian, Cottian and Maritime Alps, revealing all the towering majesty that the mountain climbs have to offer, all the way down to the impossibly charming French Riviera.

You can follow Lael Wilcox and the rest of the riders on her Instagram by following the link below: