Race organisers of the UCI World Championships in Flanders have released an incredibly detailed report exemplifying the scale of CO2 emissions caused as a result of the event.

The total carbon footprint cited in the  sustainability report amounted to 2,292 tonnes of CO2, which is said to be the equivalent to “the annual carbon footprint of 265 Belgian citizens or 1,380 return flights from Brussels to New York”. Travel accounted for over half of the emissions in the report, but it is important to note the study did not include the travel of spectators.

The report takes into account a plethora of factors including transportation, waste, food and water, as well resource and material management. While the figure released may seem like a substantial footprint, it is dwarfed by other sporting events – the most notable of which being the football World Cup in Qatar next winter which is expected to produce 3.6 million tonnes, although this figure also takes into account travelling spectators and media.

Clean Energy Wire say spectator travel can account for more than 85 per cent of the greenhouse gas emissions during sporting events.

UCI President David Lappartient applauded the race organisers and Deloitte Belgium, who aided in the collection of the data.

“As the world governing body for cycling, the UCI is committed to reducing the impact of its operations on the environment and collaborating with stakeholders to achieve significant changes within the sport.

“I therefore congratulate and thank Flanders 2021 and its partners for recognising the absolute importance of sustainability with the delivery of a strategy that covered numerous aspects of the organisation of the UCI Road World Championships.

“This report will act as a catalyst for change, providing future event organisers with valuable feedback, data and benchmarks to reduce the environmental impact – and at the same time enhance the social impact of their events.” 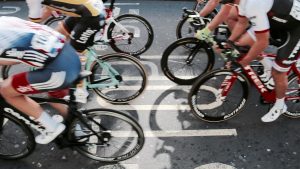 It comes as the conversation surrounding professional cycling’s environmental impact has intensified over recent years. Often the forgiving nature of a man-powered bike can mask the external factors of the cycling season, with heavy air and land motorised travel producing large amounts of CO2.

Canadian rider Michael Woods, who rides for team Israel Start-Up Nations, made recent headlines having offset his footprint during every race in the 2021 calendar. After calculating that his carbon output in 2019 amounted to 60 tonnes, he became the first professional rider to do so and is on a mission to persuade others into following suite.