GCN+ Have Released Their Most Ambitious Film to Date

GCN+, who regularly push the boat out when it comes to invigorating cycling content, released their latest film on Tuesday which follows a breathtaking cycling adventure across one of the world’s geological marvels.

Featuring Leal Wilcox, a world-renowned endurance rider, and Jenny Graham, who is the proud holder of a bike circumnavigation world-record, the pair are the stars of The Rift – the second in a series of three original films focussed on the cycling culture and outstanding routes Iceland has to offer. 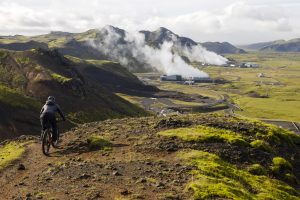 Impeccably filmed and capturing the raw emotion of the riders throughout the ultra-endurance ride, the documentary follows them through some of the most remote regions of Europe.

Towering active volcanos, spewing geysers and challenging water crossings await as they pedal 200km across Iceland’s largely uninhabited plateauxs, mountain peaks and the Continental Divide. While there, Lael and Jenny explore how the Icelandic people have harnessed their natural resources to become one of the world’s leading self-sustaining energy producers.

Speaking on her adventures, Jenny Graham said: “It was an absolute joy getting to work with Lael and be part of the GCN+ crew as we discovered Iceland; it’s people, it’s landscape and it’s amazing bike trails. We are so privileged to have been able to get out there and experience this incredible place, and I hope the documentary encourages people to grab their friends and get on two wheels to discover something amazing.”

GCN+’s Production Director Mike Rees also said: “When creating adventure content for GCN+ we are always looking for inspirational people and incredible destinations that could be combined to make a unique ride. The most important thing for us will always be the depth of the characters and their stories – something that both the Icelandic people, Jenny and Lael have in common. We are delighted to have been able to get Lael and Jenny to team up and take on an epic ride together for the first time in a breathtaking landscape and alongside such brilliant local people.”

The Rift: Riding Iceland’s Fault Line and GCN+’s catalogue of films are exclusively available via the GCN App, all web browsers, AndroidTV, Smart TV, Amazon FireTV, and Chromecast. Alongside providing comprehensive coverage and expert analysis of all disciplines of professional racing, GCN+ is home to close to 100 exclusive full-length documentaries, with more added each week.