After the pandemic forced last year’s edition to be cancelled and this year’s to be postponed back in April, cyclists from all over the globe will finally descend on the Lombardy region of Italy to tackle the dizzying climbs of the Alta Valtellina on September 12th.

Despite the current difficulties posed by the pandemic, the event has been met with a hugely positive response and enthusiasts from all over the world will be travelling to Italy to take part. 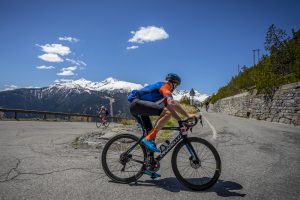 The Italian side of the Alps affords the most magnificent scenery, with immense precipices, yawning chasms and great rafts of foaming waters hurdling through the valleys. Quaint villages dotted along the mountainside, intersected by glistening sapphire lagoons and dramatic ridgelines all culminate in a spectacular trip for travelling cyclists.

The region is famous for its natural hot springs, indulgent bresaola, cheeses and wines, but most importantly, it boasts some of the most demanding mountain climbs in Europe as riders meander their way up the winding roads of the Southern Alps.

A total of 1,630 foreign cyclists from 54 different regions will be looking to soak up awe-inspiring views as they climb to nearly 3,000 metres above sea level, finishing at the top of the infamous Stelvio Pass.

Historically a hugely popular event for enthusiasts from all over the world, there has been particular demand for this year’s climb and 63% of the participants are said to be from outside of Italy. Although we find ourselves still very much in the midst of the pandemic, the easing of travel restrictions across Europe means cyclists can finally go back to their beloved escapes.

The largest contingent to have entered the event come from Germany where 270 riders will compete, with Denmark a close second with just over 250 and Great Britain have 160 entrants. Paolo Santini, the Head of Marketing for the organisers, said;

“We couldn’t be anything other than satisfied with the messages we are getting from this 9th edition of the Granfondo Stelvio Santini. The huge presence of both foreign and Italian participants despite the complicated and historic times we are living through, the epic nature of the race and the spectacular beauty of its setting have triumphed over uncertainty and fear. We hope that we will repay that faith with an event to remember!”

While there are several ways in which participants can test themselves, the Long Route is the most popular with 1,572 participants scheduled to tackle the 151.3 kilometre course along which riders will have to overcome the Teglio, Mortirolo and Stelvio Climbs, for an elevation gain of 4,058m.

693 participants opted for the 137.9-kilometre Medium Route which has an elevation gain of 3,053m and skips the gruelling Mortirolo pass. The 60-kilometre Short Route was chosen by 328 riders and is suitable for cyclists who may not possess the stamina of others but still want to test their abilities, albeit with a 2,000m elevation change.

The top male and female competitors within each route will go home with a King or Queen of the Mountain Granfondo Stelvio Santini polka dot jersey. There will also be another classification for the overall King and Queen of the Mountain for the individual climbs (Teglio, Mortirolo and Stelvio). However, there is no overall classification but start-to-finish time will be published, while there are also team awards for the most entrants and most collective finishers.

Finally, in a push to make the event that much more ecologically friendly, Santini and Polartec, who are partnering the event for the second year, have introduced a compulsory Granfondo Stelvio Santini race jersey comprising of two types of fabric made from recycled PET bottles; approximately five plastic bottles go into each jersey.