A bit more than three months since we’d started our trip from France and we were about to enter the fifth country, Montenegro. We didn’t know what to expect as we had never really heard about the country before and, after the annoying border officer on the Croatian side when we were leaving the country, we were now wondering what was going to happen at the Montenegrin border!

However, when we arrived the officer simply took our passports, stamped them both without a second glance, and we were off. As easy as that – we were on our way to Igalo.

The ride was beautiful, overlooking the bay of Igalo and Herceg Novi. It was quite chilly but clear and sunny so we stopped on a bench to have our lunch admiring the view. We were not in a rush as in the evening we were staying at a warmshowers.org host apartment, so we didn’t have to worry about finding somewhere to sleep. We arrived in the city pretty early in the afternoon, cycling along the sea straight to view the large castle, where stopped for some coffees and, sitting on a bar terrace under the sun, we looked like proper tourists for once and not like travellers!

Later on in the afternoon, we went to meet Ima and Lira, our hosts for the night; she is from Montenegro and he is from France. In fact they were cycle tourers too, and often rented out their studio flat, but in the mean time they were accommodating cyclists pasing through the city. The day before they had met another French cyclist in town, Thomas, who was also staying with them. So, we ended up staying, the five of us, in the studio flat – we were supposed to stay one night but the company was so good, despite the lack of space, that we stayed two nights there – chilling out, cooking and talking about our different experiences in travel.

On the day we left Igalo the weather was absolutely brilliant, it was perfect as we were planning to go around the Bay of Kotor. We said bye to Ima, Lira and Thomas and we were back on the road. We followed the coast and passed through beautiful little towns and villages, people were waving at us, and every time we stopped they were coming to have a chat with us, we already had a really good feeling about the country, but this enamoured us with the place further.

As soon as we entered the bay of Kotor we were struck by the stunning scenery, surrounded by the mountains, the sunlight was creating beautiful colours all around us and reflecting mirror-like off the water. We were in heaven or probably not far away.

In the evening we arrived in Kotor and regretted not arranging to have stopped there, as it seemed to be very beautiful. Instead we cycled past the city and we came across a dog refuge where we asked the owner if we could spend the night on her land. She kindly brought us to one of her fields nearby where it was a bit quieter and further away from the dogs.

The next morning we took the direction of Budva and rejoined the coast. We took our lunch on a beautiful beach and decided this time not to miss a visit to the city. We headed straight to the old town, where you can enter through the different gates, as it was once a fortified town. No cars, only pedestrians, paved streets, great architecture and cute little shops; we were enjoying our afternoon visit immensly on this warm, sunny day. At the end of the afternoon we headed off in the direction of Petrovac, and on our way we found a nice spot to pitch our tent, just overlooking the sea with the sun slowly setting in front of us.

When we awoke, the weather had turned cloudy and the temperature had dropped. As we wanted to go to the Lake Skadar, we had to leave the seaside and cross the mountains inland. At least we had to climb all day, so it kept us warm. The climb was not easy at all, but every time we stopped for a little break, we looked behind us over the view to the sea, which was marvellous. However, unfortunately, just before we arrived at the top of the mountain pass, we entered the clouds and our magnificent sea-view disappeared. 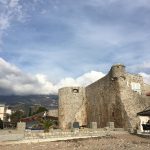 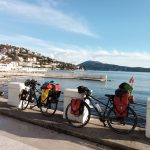 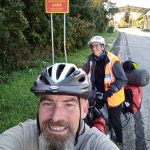 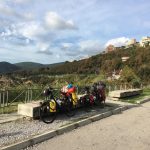 On our descent, when we finally came down out of the clouds, we discovered the brilliant view of the lake was to sit before us the whole way down – there is nothing better than a long downhill with beautiful scenery in front!

Later we also spotted an abandoned factory, probably a vestige of ex-Yugoslavia, and thought it would be a good place to camp for the night. We had to pass through many pleasant-looking villages to finally reach our destination, but it was absolutely worth it as there was nobody around so we could have a peaceful night…

For the full article click here or get the print version