In a recent report conducted by Bikesure, attitudes towards the expansion of the Ultra Low Emission Zone (ULEZ) later this year reveal that a proportion of Londoners are expected to substitute four wheel travel in favour of greener methods.

Bikesure, who specialise in motorbike insurance, say this year 18.6% are set to choose two wheels over four with 9.3% of them favouring an eclectic or low-emission motorbike, moped or push bike over any other vehicle type.

Those with the intention of swapping to an electric vehicle or bike can save £12.50 per day, and rather encouragingly, only 13.5% of people within the study said they were planning to stick with higher emission vehicles.

With the expansion set to come into force in October 2021, it would seem the push for a greener London has accelerated significantly, and although the vast majority of people in the city will continue to pay their way by sticking with petrol vehicles for the time being, 73.4% said they intended to switch in the very near future.

The scheme is being widened by Mayor Sadiq Khan from central London, where it launched in April 2019, to improve the capital’s air quality.

He said: “As I did with the central London ULEZ, I plan to publish regular reports evaluating the impacts of ULEZ expansion.”

TfL officers will undertake air quality emissions modelling, and review what the air quality monitoring data shows, once there is enough data available to separate out the impact of the scheme on air quality changes.”

Early reports will focus on monitored changes in vehicle numbers and compliance with the ULEZ emission standards.”

It is estimated the larger zone, which is 18 times the size of the original area, will reduce nitrogen dioxide levels by about 30%. 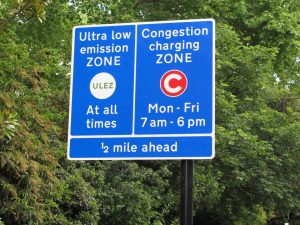 While the impact of ULEZ can only be viewed as a positive step in the right direction, commuter approvals have slightly decreased as almost 4 million people are set to be impacted. This year, 40.3% of respondents felt it was a good idea, compared to 44.9% in 2020.

There has also been a decrease in the amount of people who understood the reasons behind the ULEZ expansion, but couldn’t help but feel frustrated by it, particularly with the recent easing of coronavirus restrictions and the return to the workplace.

This year, 37.5% approve of the ULEZ expansion but are frustrated by its impact on their lives, down on 43.2% surveyed in 2020. Although there has been a ‘work from home’ revolution, particularly in larger cities such as London, the recent easing of restrictions will again see volumes of traffic return to the centre, signalling the need for an expansion of the ULEZ.

However, and rather encouragingly,  37.4% feel the introduction of Clean Air Zones (CAZ) across several major UK cities including Birmingham, Glasgow and Bristol, is a positive thing for the UK. While some scepticism remains,  again the vast majority (66.1%) hold positive sentiment for the introduction of CAZs.

“After a tough start to the year for the motorcycle industry, it is encouraging to see a positive increase in those not just considering switching their form of transport to motorbikes, but also considering electric alternatives” says Rob Balls, Underwriting Manager at Bikesure.

To conclude their report however, Biksure assert that once electric vehicles become more affordable to the masses, people will adopt cleaner travel and scepticism about lower emission zones will be a thing of the past.

They do admit however that fewer people have made the change towards greener transport than anticipated two years ago, and frustrations over the increasing financial impact on daily life still take precedence.