The National Cycling Centre in Manchester, which has been the home of British cycling for over 25 years, is set to receive a comprehensive renovation project estimated to be worth £21million.

Working in partnership with Manchester City Council, MCRActive, operator GLL, British Cycling and a range of other stakeholders, ISG are at the forefront of the modernisation of the centre. The global construction specialists already have a 15-year affinity with the venue having twice renovated the track; most recently in 2018.

Back in 1994 when the National Cycling Centre was officially opened, it became Britain’s first indoor Olympic cycling track and holds great significance amongst those representing the national team, as well as aspiring young cyclists. As well as housing a velodrome it is also home to BMX arena and outdoor mountain bike trials, and houses offices for British Cycling, the governing body for cycling in Britain. 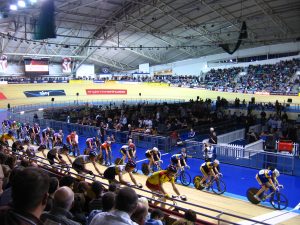 Existing as one of the world’s busiest velodromes, the aim of the investment is to safeguard the home of British cycling by making significant upgrades to a now ageing venue, including the track itself as well as a double-pronged approach with expansion and improvement to spectator facilities.

The scheme also includes the installation of new state-of-the-art track timing, photo finish technology, a digital display board, and refurbishment of the central sports court area within the track area.

Having existed for as long as it has, there will be a push to bring the venue in line with a more efficient and eco-friendly outlook for the future. The building will be equipped with air source heat pumps, LED lighting will be installed throughout and improvements will be made to the fabric of the building to optimise thermal performance; this is all with a view to reducing running costs while significantly reducing the carbon footprint of the building, particularly now it is in constant use for seven days a week.

Paul Collins, framework manager at ISG, commented: “We are proud to be working on this exciting project at such a prestigious sporting venue, which has supported so many fantastic achievements by British athletes on the global cycling stage over the past 25 years. This scheme will secure the NCC’s position at the heart of British cycling, future proofing this outstanding elite and community sporting venue for the long-term.

Councillor Rabnawaz Akbar, Manchester City Council’s executive member for Neighbourhoods, went on to say: “The investment to refurbish the National Cycling Centre will ensure that this iconic venue will fulfil its purpose as a home for world-class cyclists and the communities it serves in Manchester for years to come. The upgraded facilities and greener energy systems will significantly reduce the carbon emissions making a big contribution to the city’s climate change commitments.”