Ted Reddick: Cycling in the Face of Transverse Myelitis

Reddick to Tackle Legendary Mountain Climb for a Second Time

After featuring his story back in our July edition, Ted Reddick is again planning to overcome Mont Ventoux – one of the most infamous mountain climbs in Europe and a regular feature in the Tour de France.

Indeed it is a tough climb for any athlete, but Reddick’s story is made even more remarkable by the fact that he was paralysed from the neck down when he was diagnosed with Transverse Myelitis (otherwise known as TM), which is a disorder caused by inflammation of the spinal cord, in October 2018. 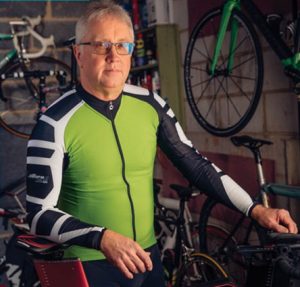 This was undoubtedly a devastating diagnosis having been a professional road cyclist back in the 1980s and 90s. However, the 58-year-old’s condition has improved considerably due to intensive and costly neurological rehabilitation and physiotherapy.

After raising over £32,000 for charity on his first ride, Mr Reddick plans to return to tackle the 6,2000ft mountain in 2022 in the hope of bettering his initial efforts.

After two hours on the bike and 13 miles of gruelling, continuous climbs, he had to be helped from his bike as his legs had literally stopped working and he was left unable to walk.

Despite collapsing, he returned four days later to complete the remaining 3.5-mile ride from a standing start at an average gradient approaching 10 per cent to conquer the mountain, and complete the ride in the face of adversity.

He said: “It was so tough to complete the ride. The idea this year was just to get to the top and I want to return again next year because if I don’t have a goal, I go backwards. I have to keep moving and doing activities otherwise my condition will deteriorate.

“The last kilometre was extremely testing, as the effect of the gradient was worsened by having to ride a section directly into a circa 20 mph headwind.

“My accompanying rider literally threw his bike onto the side of the road and ran alongside me to ensure that I could be assisted if the effects of TM took over but I managed to clear the penultimate bend before things started to ease slightly before the top.