The beautiful roads of Volta Portugal

The Volta a Portugal is the ex libris of Portuguese cycling. On a smaller but no less important scale at a national level, Volta is to Portugal as the Tour is to France, the Giro is to Italy and the Vuelta is to Spain.

Known internationally as ‘Grandíssima’, this nickname was born in Spain and thanks to a particular rider, Pablo Lastras, current director of Movistar Team. The most recognized international riders rode in their time the Volta a Portugal. Familiarized with the most important and intense races of world-wide cycling, as in the case of the three Grand Tours, the riders arrived in Portugal without much notion of the difficulty that they would face in the Portuguese race. 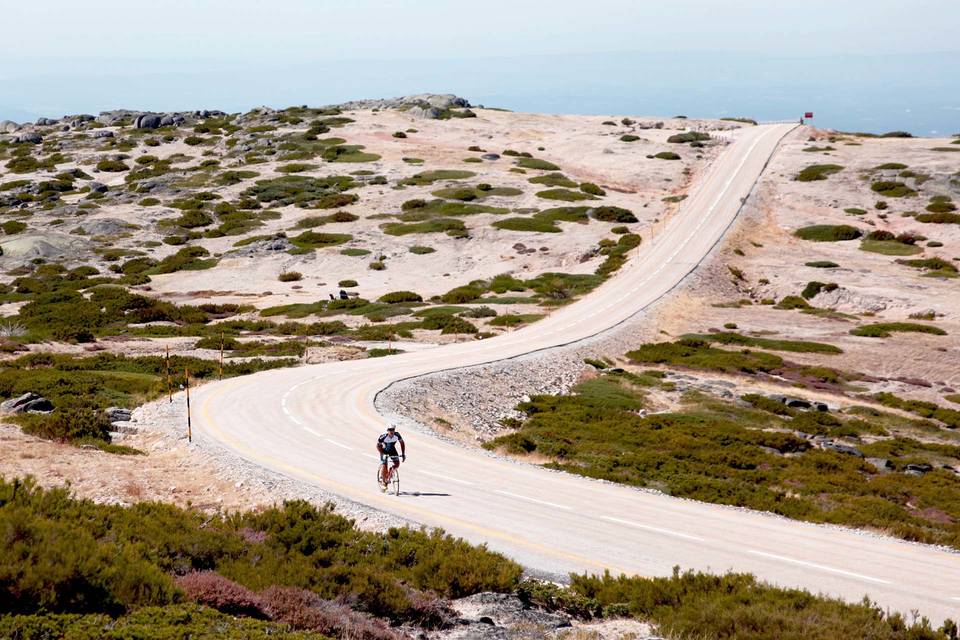 In this stage, we select the Serra da Lousã, where we can glimpse a group of beautiful and small Shale Villages: Aigra Nova, Aigra Velha, Candal, Casal de São Simão, Casal Novo, Cerdeira, Chiqueiro, Comareira, Ferraria de São João, Gondramaz , Pena and Talasnal. In these villages, which seem to be stopped in time, covered in shale and quartzite, we lose ourselves in the charm and magic of its fauna and flora, the steep areas and the stones carved on the façades of some houses.

The second stage in line will pass through Bucelas, which brings us once again to the aromas and flavors of the wine, were it not one of the best-known wine regions of the country, not forgetting its gastronomy, traditionally served in restaurants such as Barrete Saloio or Chão do Prado, which rests at the foot of the vineyard as a landscape. Culturally, we have the essential visits to the Wine and Vine Museum and to the Main Church, owner of an interior wealth dating back to the 16th century.

Between Santarém and Castelo Branco, we have to stop at Vila Velha de Ródão, known for its museum spaces dedicated to prehistoric art, linen and weaving, to the production of olive oil. Besides the cultural part, if we go up to the Castle we can enjoy a breathtaking view of the Tejo River.

Alto da Torre needs no introduction. Placed in the Serra da Estrela, there we ride in altitude, but not solely … this is the mountain that keeps in its bosom the secret of the most famous cheese of sheep, with denomination of controlled origin and being of the oldest in literary mentions, like in the century XVI by Gil Vicente. Traditional sausages, honey and sweets also fill an exquisite table of flavors. In addition, it is one of Dão’s sub-regions with special characteristics, influenced by the altitude, that make the wines to have their very own characteristics.

Among the several places where the fifth stage will pass, we focus our attention on the village of Canas de Senhorim, in Nelas, as it offers a typical rural area for those who like the surroundings of rustic landscapes, from Beira and granite houses to the paved pavements of the streets. Among the gastronomic pleasures are the Travesseiros de São João and the Pato àModa da Beira.

On the sixth stage we find a breath-taking landscape, the Douro International Natural Park. In a protected area of ​​about 29 species of fauna and flora, few words exist to describe what nature offers on some 87,000 hectares of a valley located on the shores of Portugal and Spain.

The Serra do Larouco, in Montalegre, begins to become an essential point of the Volta a Portugal and, for this reason, we cannot leave aside our choice. From the height of its 1,527 meters of altitude, we glimpse an endless landscape horizon, overlooking the valleys of the rivers Lima, Tâmega, Cávado and Rabagão, besides several villages, the village of Montalegre and the Spanish Galiza.

In Felgueiras, there is a dream nook called Paço de Pombeiro. Classified as a Monument of Public Interest, in order to get to this Manor House, with Manueline architectural route, we have to walk through the old Rua do Burgo. The vineyards and cultivated fields give a familiar air around the house, which retains its rural characteristics to accommodate the tourists in a more intimate way.

The Sanctuary of Senhora da Graça on the top of Monte Farinha, in Mondim de Basto, represents one of the mythical arrivals of the Volta a Portugal. But the town has much more to offer to those who visit it, such as the Mountain Villages, embedded in the mountains as its name suggests. In the gastronomy stands the Posta Maronesa or the Cabrito Assado no Forno, the Pão-de-Ló Húmido and the Green Wines of Mondim, coming from the hillsides of the Tâmega valley.