Breathing During Exercise Doesn’t Have to be a Struggle

The importance of breathing, not only during exercise but also in our general daily lives, is often overlooked. To breathe is to live, but controlling how deeply and frequently you inhale and exhale is something that often gets categorised in the sweeping modern ‘wellness’ trend, but the real world benefits can be traced back thousands of years.

Even the simple act of deep breathing exclusively through your left nostril can your lower blood pressure and heart rate, while the right nostril can help to kickstart the digestive system as well wake up the nervous system after a period of no activity.

However, in this article we will continue our training tips series by looking out how to control your breathing while out on the bike and pushing your cardiovascular system.

While it may seem counterproductive to breathe exclusively through your nose while exercising, there are proven benefits. Most notably, nasal breathing takes advantage of the lungs’ ability to extract oxygen during exhale, resulting in 10–20% more oxygen intake during mild to rigorous exercise.

Although it may feel as if you desperately need to get as much oxygen in as possible as first, and in turn breathe through your mouth, just focusing and controlling your nasal breathing can reduce how heavily you are huffing and also increase the performance of your muscles.

By syncing up your pedalling and breathing, this intentional act focuses the body on the harmonic balance of the two, thus hopefully becoming second nature and taking the mental effort away of doing each individually.

The key to this is to find a state of zen in which neither the breathing nor the pedalling take precedence, and instead co-exists in a natural tandem. For example, begin by trying three revolutions for an inhale, and five to exhale, and adjust accordingly if you feel particularly out of sync.

Make Full Use of Your Diaphragm

Although incrementally, lung capacity starts to decrease with age – starting at about 30-years-old. About 10% is lost for every subsequent decade, so any attempt to slow this process is not done in vain. 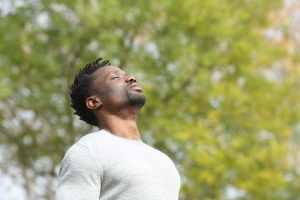 While this isn’t necessarily directly related to the physical act of being on a bike, being able to maximise the amount of oxygen in your lungs per breath can help slow down this process. By exhaling and emptying the lungs with force, it allows for a greater intake of oxygen upon inhaling, this increasing the amount of oxygen the lungs are able to take in.

There are also activities you can do while not on two wheels, most notably yoga, which has prioritised mindful breathing for millennia. One of the most successful British cyclists of all time, Bradley Wiggins and pro mountain biker and Olympian Jeremy Horgan-Kobelski have been known to practice yoga in the hope of raising their level of performance.