Build Your Capacity for Cycling With This Training Method

Breaking through self-imposed ceilings when it comes to cycling endurance is just as much a mental battle as it is a physical one. Whether it be keeping up with your mates, surpassing a timed goal or pedalling just that little bit further on your usual route, there are few things more gratifying than bettering yourself.

In this article, we continue our ‘training tips‘ series by taking a look at polarised training as a way to build your cycling endurance.

As is the case with the majority of people, it is hard to find the time to establish a base fitness. That is, squeezing four or so hours of cycling in every day at low-intensity and as a result, increasing endurance bit by bit.

This is where the concept of polarised training comes in. As the name would suggest, this method emphasis both ends of the intensity spectrum, so your body start to react to differing levels.

That means, in any given week, you do both really intense, taxing rides and then easy aerobic ones; the best of both worlds. Crucially, this is split not in half, but with a larger emphasis on the regular aerobic exercises. The best way to build endurance is by blending the distribution of your training so roughly 80 percent of your rides are in those aerobic zones, and about 20 percent are performed with speed, power and intensity.

“Ultimately, your ‘base’ comes down to your mitochondrial capacity,” says exercise physiologist Paul Laursen, Ph.D., of the training service lab Plews and Prof. “Research shows that while longer, lower-intensity exercise increases the number of mitochondria in your cells, high-intensity training makes those mitochondria more powerful.”

It it also worth noting that after high-intensity interval training, your heart rate remains elevated during rest periods. This helps to keep the parts of your body associated with aerobic exercise ticking over and alert, allowing you to feel more prepared when you do eventually get back on the bike.

Putting it Into Action

While those percentages can sound very vague and differ between people’s training time, a good place to start is putting aside time for two high-intensity sessions a week.

The focus, as mentioned, is not so much the distance you pedal, but more the intensity at which you ride.

With this in mind, you should cycle at intervals ranging between 30 seconds to five minutes, at a very hard intensity. Start small and build yourself up week-by-week to progressively overload. 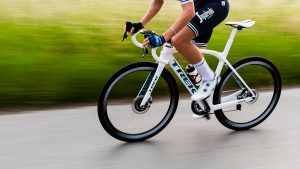 “Performing three to six of these leg-burning efforts, allowing one to two minutes of recovery in between, can have impressive effects,” says Laursen.

Then, for the remainder of the week, ride at a pace you are comfortable with, while still increasing the distance with small incremental improvements when you feel ready.

It’s essential that you not only include easier days and recovery days in your weekly plans, but also that you eat a balanced diet brimming with nutrition, as well adequate sleep. Exercise is only part of increasing endurance – a lot of the improvements happen when you are looking after your idle body.