Vaccination Obligatory for Athletes Wanting to Compete in France

A new law has been passed in France, making it obligatory for incoming professional athletes to prove they have been vaccinated against Covid-19.

In what currently exists as a particularly contentious issue in the case of Novak Djokovic and the tennis world, it is expected that more countries may follow suit after Australia barred the Serbian from defending his title at the Australian Open this month due to not having sufficient protection from coronavirus.

It would seem that France’s Sports Minister Roxana Maracineanu is keen to avoid a repeat of the very public legal tug of war that has unfolded over the past few weeks with Djokovic, by getting ahead of the issue before France’s sporting calendar for 2022 starts to intensify. 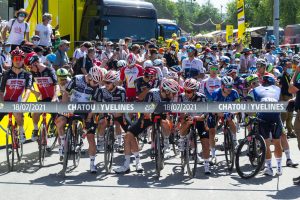 “To practice your profession or come for pleasure as part of a sports team you will have to have a valid vaccine,” Maracineanu told French media, setting out the new laws and making clear there will be no exemptions.

“That’s the case for both people who live in France and also for foreigners who come to our country for a holiday or a major sporting event. Athletes have a role to play in helping convince non-vaccinated people into the vaccine programme as soon as possible.”

France has already introduced fairly stringent measures in wider society – most notably with so-called ‘health passes’ which grant citizens entrance to restaurants and bars as well as attend larger-scale events. The health pass is touted as a precursor to an incoming vaccine pass, with the long-term strategy aiming to end the use of costly, short-term testing.

This is likely to be obligatory at sporting events attended by the public, which will include cycling events. Elsewhere around the world, nearby Italy has already adopted a similar ‘super green pass’ that limits the use of hotels by non-vaccinated people, while domestic vaccination laws in the Middle East means travelling athletes are likely to face a similar fate, potentially affecting the Tour of Oman and the Saudi Tour.

France hosts some of the most coveted cycling races on the circuit, and may force teams into selecting fully vaccinated riders and staff for the Classics as well as road races such as Paris-Nice and the Tour de France.

While most teams are near full vaccination, Cycling News report that a confidential survey carried out by the UCI before the UCI WorldTour seminar last December, specifies that 75% of teams had more than 80% of vaccinated riders and staff. However there was an inconsistent heterogeneity across teams, ranging from 40% to 100% vaccinated.