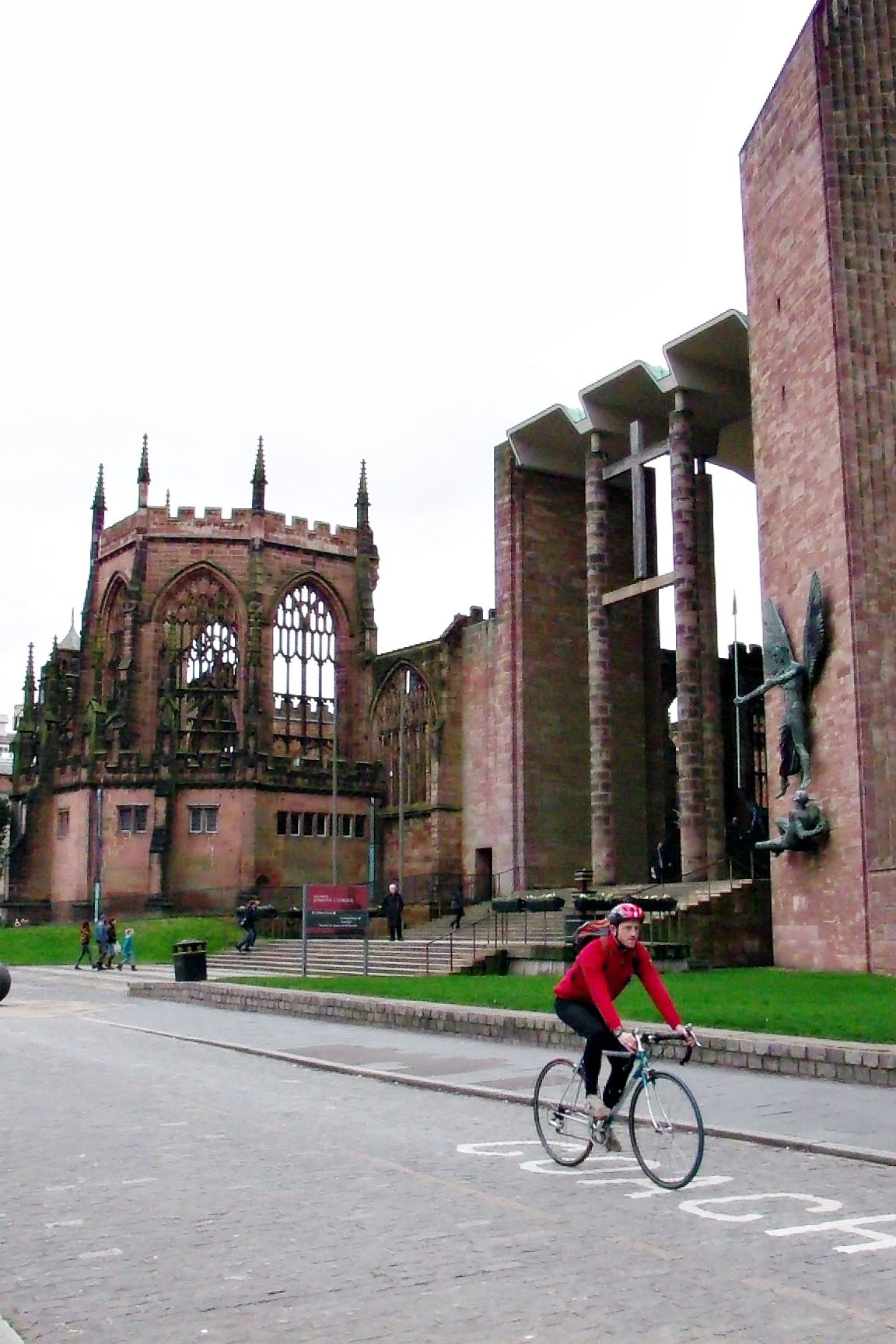 Any ride is a good ride in our book, We love the simplicity of exploration on two wheels, regardless of the weather. With this in mind we had a plan for a journey of contrasts, to pedal from my home town of Royal Leamington Spa (the prefix only used cynically when trying to impress and its suffix added due to the once medicinal qualities of the water) to the misunderstood and unquestionably less genteel city of Coventry.

We set off from Leamington’s War Memorial, a mesmeric bronze figure with head bowed in mournful pose but juxtaposed dissonantly amongst a glut of estate agents. It stands proudly, its presence so impressive, freely provoking thought and remembrance. Today the clarity of the light emphasised the handsome bronze life sized figure.

Our route took us out onto the busy Kenilworth Road (A452) before reverting to the blissfully tranquil roads around the Royal Agricultural Centre at Stoneleigh. The weather was behaving, the sky was overcast but thankfully the expected wind and rain had failed to arrive. Considering we had only just left the urban sprawl, the calm that descended was so contrasting.

The descent into the quaint village of Stoneleigh was exhilarating, the hill is completely enveloped in glorious greenery which only heightened our senses and focus. The speedy downhill had obviously tested my concentration levels because I could feel my tongue protruding from my mouth, a common sign of deep thought in the Whitlock family (I admit it doesn’t happen that often). We breezed over the river before exposing my nostrils to the pungent aroma of the nearby sewage works.

Why Coventry, the simple answer is why not!. We do have a modicum of sympathy towards the City and its people, it has many harsh critics and it to many conjures thoughts of an unprepossessing place that has suffered years of post-industrial decline. Unfortunately its best known for its inclusion in the British idiom ‘to send someone to Coventry’, the process of ostracising by non-communication or simple alienation.

It’s the favourite weapon of childish bullies across the globe, and its actual origins are unknown but it is believed that events in and around Coventry during the English Civil War may have a bearing. On the positive it is also home to Jaguar, Land-Rover and where the 2 tone pop phenomenon started in the late 70s. 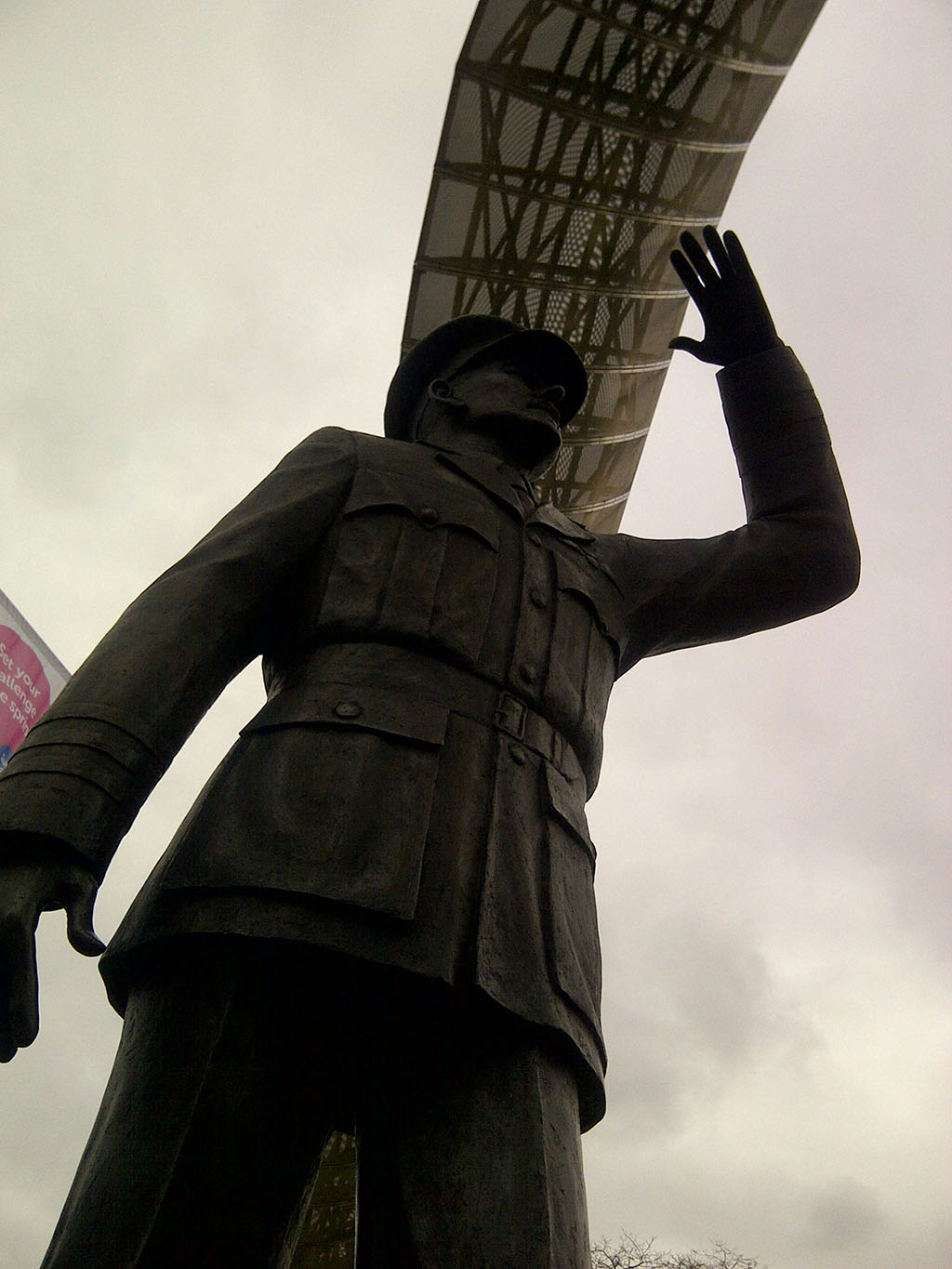 But, as the specials sang on 2 tone all those years ago, it is a concrete jungle. The first real indication we had hit the city was the emergence of bland underpasses and subways, the ever present of any urbanised metropolis.

Thankfully the city is easy to navigate by bike, offering plenty of designated cycle paths and the ubiquitous on road cycle lanes, you will undoubtedly encounter a multitude of one way systems and vigilance and common sense (a under-rated facet nowadays) is essential at all times.

If we are being truthful the City has suffered a decline in recent times (mirrored by the football team), stark evidence of this is in its buildings which are comparatively young, especially in and around the heart of the city but already could benefit from a productive makeover.

The grey drab facades create a rather melancholy air (it would never be described as being crammed with disturbingly expensive designer shops, more working class, than pretentious indulgence) but it does offer several teasing hidden gems. The city is being reborn, its resolute and strong character has created a resurgence in fortunes and this is what we hoped to find from the saddle. Our initial destination was the city’s historic flagship attraction, the Cathedral.

As we approached the building we were taken aback by the imposing figure of Sir Jacob Epstein’s bronze sculpture of St Michael standing over the devil, the figure possesses an overwhelming power, a simple statement of divine presence with arms flung wide to welcome all. On the night of 14 November 1940 the city changed forever following some expertly executed bombing raids by the Luftwaffe. The 14th Century Cathedral was hit several times and it burned with a large part of the city, the old quarter with its collection of black and white timber buildings was one of the most notably devastated areas.

The ruined shell that remains is a fetching example of fortitude through devastation at the hands of humanity. A truly magical interplay of vibrant art, religion and kinship. The new building, designed by Sir Basil Spence is magnificently simple, the modern wide open expanse of the nave is surprisingly comforting. We sat and immersed in the sobering silence. Only the tower, spire, outer wall and the bronze effigy and tomb of its first bishop survived.

Shortly after the bombing two of the charred medieval roof timbers were discovered fallen in the shape of a cross. They were set dramatically in the ruins, more recently another cross was fashioned from three medieval nails by a local priest, this is referred to somewhat appropriately as the Cross of Nails and is recognised as the sign of defiance, faith and simple hope..

As we departed, we caught a whimsical image of the Holy Trinity Church, we were intrigued. Its locati 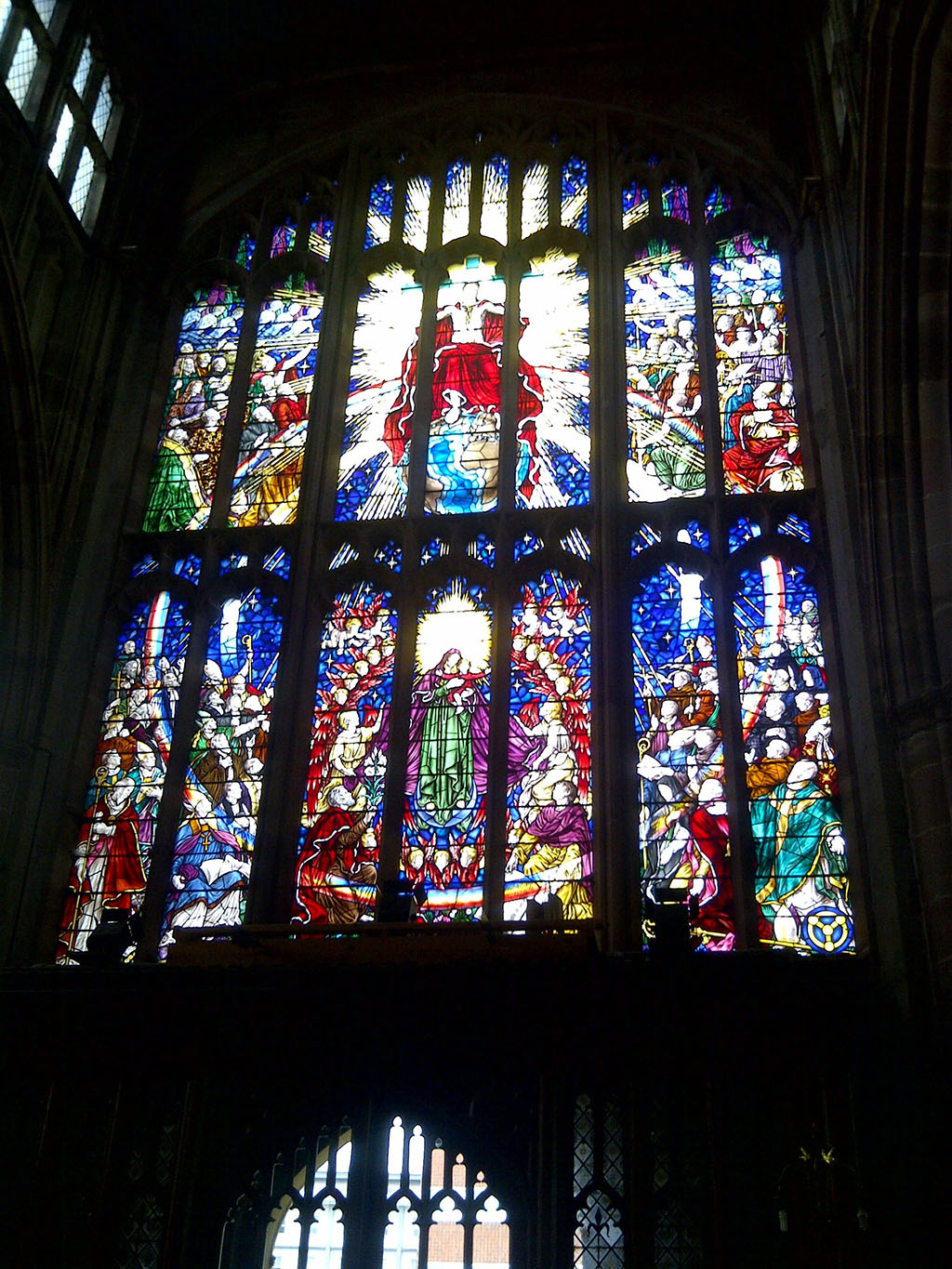 on awkwardly sandwiched between Wetherspoons and string of high street stores. The church’s simple and subdued exterior doesn’t prepare you for the absolutely enthralling interior, the stained glass windows are breathtaking.

The mystical stillness provides a pleasant setting to visually explore the infamous ‘Doom painting’, known by many as the ‘Apocalypse painting’. It’s extraordinary to believe the simple but lifelike figures are nearly 600 years old, their power is astonishing and demonstrate the battle of good over evil and the eternal consequences faced by many. The images so vivid, so dark, so expressive representing so aptly the ultimate choice, Salvation or damnation! I was finding it hard to contain my emotions, so we left.

After contemplating our considerably meagre existence we pedalled away from the stillness along Trinity Street. In keeping with the adage that life is a journey, our next port of call was the Transport Museum.

For over 100 years Coventry has been the centre of the UK motor industry, both four and two-wheeled, associated with such illustrious names as the aforementioned Jaguar, Land-Rover, Daimler, Triumph, Massey Ferguson and Peugeot, so its only appropriate that it has a museum to honour the endeavours of its skilled workers over the years. Even Black cabs have been sent to Coventry and are manufactured in the city by Geely.

We were immediately faced by the impressive contemporary Whittle Arch which is supposed to replicate a large double wing, it’s a refreshing accompaniment to a statue of Sir Frank Whittle who’s contribution to history is legendary, he is credited with inventing the turbojet engine which revolutionised air travel and was a son of the city, being born in Earlsdon in 1907. As we traipsed across the courtyard under the arch we discovered a spectacularly surreal world map beneath our feet; in one simple step for mankind we managed to travel between Pyonyang and Beijing, if only it was that simple, especially the North Koreans. 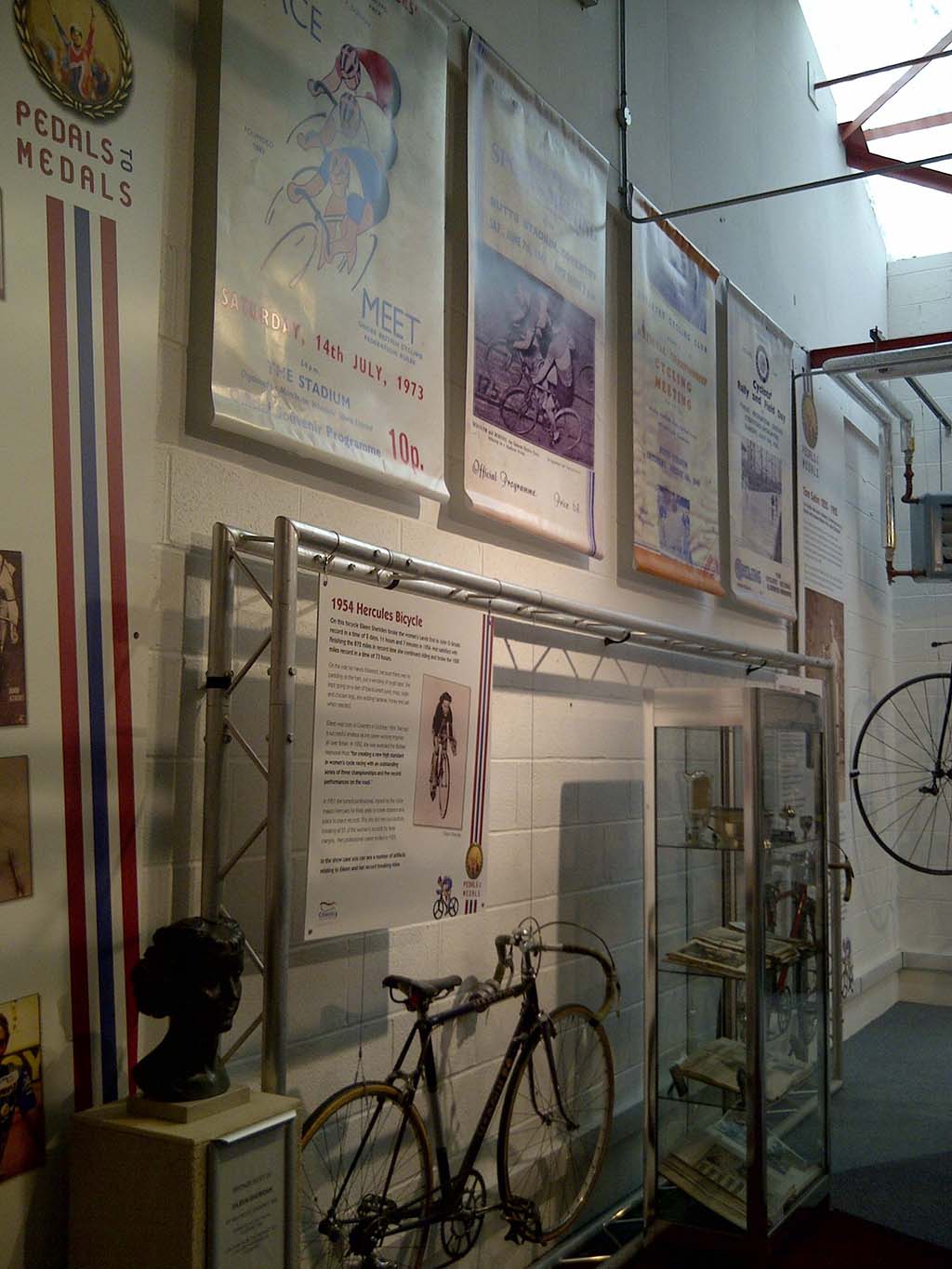 The museum is a joy, we absolutely love the place, a jumble of cars, buses, motorbikes and a whole section dedicated to the humble bicycle, lie within. Its extensive collection of vehicles is acknowledged as being one of the finest in the world and its offers a fantastic day out for all the family, as well as providing a perfect snapshot of the city’s motoring past. Parts of the museum have been recreated to allow the visitor to face the atmosphere of the Blitz. The dark, dank surroundings provide a brief insight into what the people of the city had to endure and is testament to the strength and determination of the populace.

The majority of our many visits always involve us speeding through the motor vehicles section before spending a unhealthy length of time exploring the cycling section and its dizzying array of bikes. (we feel no need to detail in words our nerdy excitement). Before departing we paused in the foyer for a reasonably priced coffee, and watched the frenetic movements from the bus station.Nothing stays still in Coventry for long.