4 of the Best Cycling Apps for Tracking Your Fitness Goals

Apps to Help You Reach Your Objectives

Whether cycling is a leisurely pursuit, or you ride with a competitive element, the advent of GPS powered technology has allowed for multi-faceted fitness apps to completely transform the way we track our progress.

The primary advantage to using a mobile cycling app is that you are able to prepare, trace and record your rides using the device you already own. While bike computers exist and work in similar ways, apps have a plethora of other features, such as allowing you to share your ride and compete with others, even if you are riding alone.

In this article, we take a look at some of the most effective cycling apps in helping you to stay healthy  and striving towards your personal goals.

One of the prominent features that sets Strava apart from similar apps is the ability to “compete” with other users in the local area on the roads, climbs and trails around you, as well as looking at other routes that people have shared on the platform. If you are indeed a competitive rider, the added benefit of social motivation and pushing yourself against the times of others is a fantastic feature. 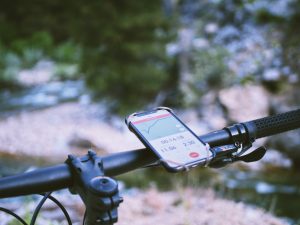 It is also compatible with most bike computers out there, and also has a connectivity feature to Apple watches if you want to keep your phone in a more secure place during your ride.

The phone app monitors cycling information, speed, distance and elevation, all of which can sync with your online account, making it a truly personal experience to keep you on track with your cycling goals.

The paid version of the app unlocks further benefits which may be of use to frequent recreational and competitive riders, such as live location tracking, interval training, audio coaching, in-app camera, ad-free usage, heart rate analysis, customisable splits, training plans and advance leaderboards.

The route mapping tools are very advanced which makes it a hugely popular service for long-distanced rides, while the platform also exists as a desktop version, allowing you to save and export in various files such as .TCX and .GPX to be uploaded to devices such as those from the Garmin line. It supports Bluetooth accessories for adding heart rate, cadence and speed data as well.

You’ll have to upgrade for permanent access to premium features such as custom navigation and offline maps, while route editing is only available via the website (no app access). While this may be a drawback for some users, the value for money it represents is superb, and the features that are unlocked as a result can transform the way you plan your routes.

Although slightly less advanced as a cycling tool, Google Maps represents a very user-friendly interface and a superb route tracking ability for finding your round your chosen region.

While many people utilise the app to get around on foot or by car, Google Maps also has a bicycle navigation feature, showing multiple ways to get around on two wheels by highlighting nearby bike paths and designated lanes. As well as this, Google Maps also allows for offline use of selected areas and routes if downloaded ahead of time, so you don’t have to worry about using up precious data on your excursions.