So, as I sat on a flight up to the Scotland’s capital on what could only be described as a Cortina with wings (and more worryingly propeller’s) I tentatively approached the topic of cycling in the city with my wife of one day, Sarah.

Ok, I admit not the most tactful of propositions considering we were only a couple of hours into our honeymoon but surprisingly she communicated a resounding thumbs up, even more reason to recognise I had made a fine choice of soulmate. This was my first visit to Edinburgh, although not Scotland, and my hope was to find a city brimming with history, culture, fine food and hopefully some fine weather.

My initial thought as we alighted the Airlink bus was ‘What a City!’ An assault on my eyes and ears, around every corner stood an historic sculpture or dazzling monument, all stunning and captivating. We quickly located our hotel, strategically placed just of Princes Street, in the shadows of the Nelson Monument, which sits imposingly amongst the greenery of Calton Hill. 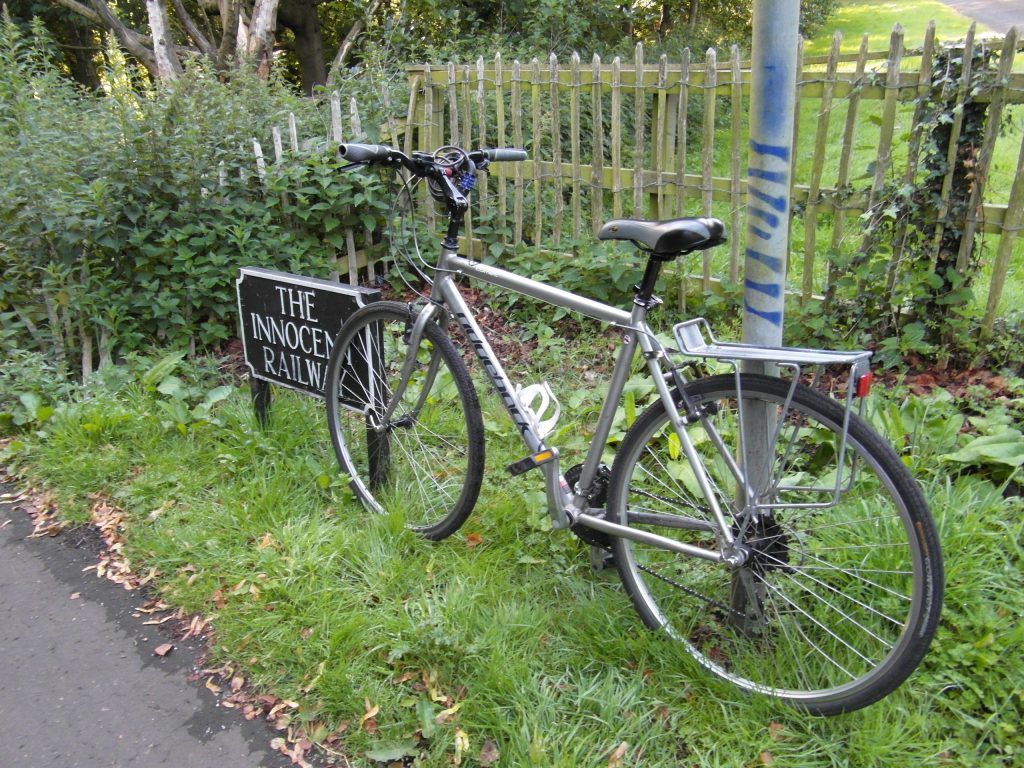 The early morning roads are dominated by buses with the sporadic cyclist dwarfed by these metal monsters. The city bustling, the noise of bagpipes, animated soft accents and those buses, they clog the thoroughfares, the congestion incessant at times. However, the city has an indescribable magic, its brimming with people but somehow it maintains a rather rural feel, it’s spectacularly surreal.

Everywhere a friendly face clad in tartan greets you, proudly promoting the joys of their home city. The daily reminder that you are in the capital comes in the form of the Scott Monument. It casts a domineering shadow over the commercial district of Princes Street. Yet surprisingly this area is in fact home to some glorious green open spaces which actually belie its urbanised prominence, crammed with disturbingly expensive designer shops.

The first thing to do was track down a bike, and the tourist office on Princes Street were extremely helpful in identifying several worthy contenders, as well as plying me with a bulky supply of local cycle routes. I opted for Cycle Scotland located on Blackfriars Street, just off the cobblestoned Royal Mile. The owner Pete was a likeable eccentric chap with long flowing hair and an endless repertoire of animated tales about past cycle journeys and experiences.

He was especially passionate about his trips to the Highlands and beyond. His bike hire business has been running successfully for many years and offers bespoke individually tailored cycle tours around Edinburgh, and wilderness tours of the Highlands and Islands, as well as canoe and Kayak excursions. The shop is an Aladdin’s cave of bikes, Lonely Planet guides and a dizzying array of general cycling paraphernalia. My kind of place! 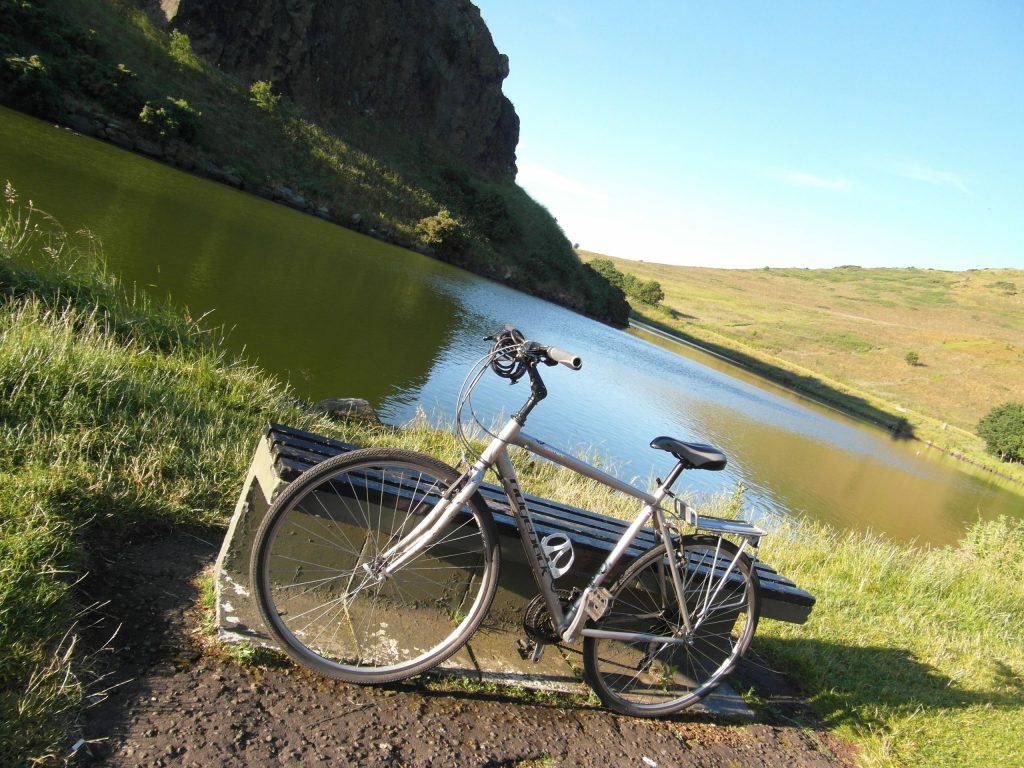 We agreed that I should take a sturdy hybrid and as I departed, he thrust a laminated map in my direction. He was adamant of its qualities and ensured I would have an intense experience. The map intricately detailed a route up to and around Arthur’s Seat and then back towards the city following the evocatively named ‘Innocent Railway cycle path’. On my way back to my hotel, I encountered plenty of cyclists, young, old, business and student types. All appeared comfortably adept at weaving in and out of the traffic, oblivious to the dangers of the constant flow of trams and buses.

I was up early the next morning, I couldn’t contain my eagerness to get out and explore after Pete’s enthusiasm. My route took me briefly along the rather unusually deserted Princes Street, passing the exquisite statue dedicated to the Duke of Wellington (which always has a seagull sat atop his head, regardless of weather or time of day) before halting briefly by the Scott Monument. Its Victorian Gothic construction is spellbinding; the tower is 200ft 6” high and has a series of viewing platforms reached by a collection of spiral staircases.

The highest platform is reached by ascending 287 steps and has been eloquently described as looking like a “Gothic rocket ship”. Next, I approached a slight incline as I made my way towards the Royal Mile. Again, this was relatively deserted as I headed east towards the Palace of Holyrood house. I paused briefly by the ornate gates to the palace before continuing on past the parliament building and into the glorious remoteness of Holyrood Park. The stunning views of Margaret’s Loch and the ruins of St Andrew’s chapel set into the hillside were hypnotising. It was astonishing that only a few moments previous I was negotiating the urban metropolis of Scotland’s capital. 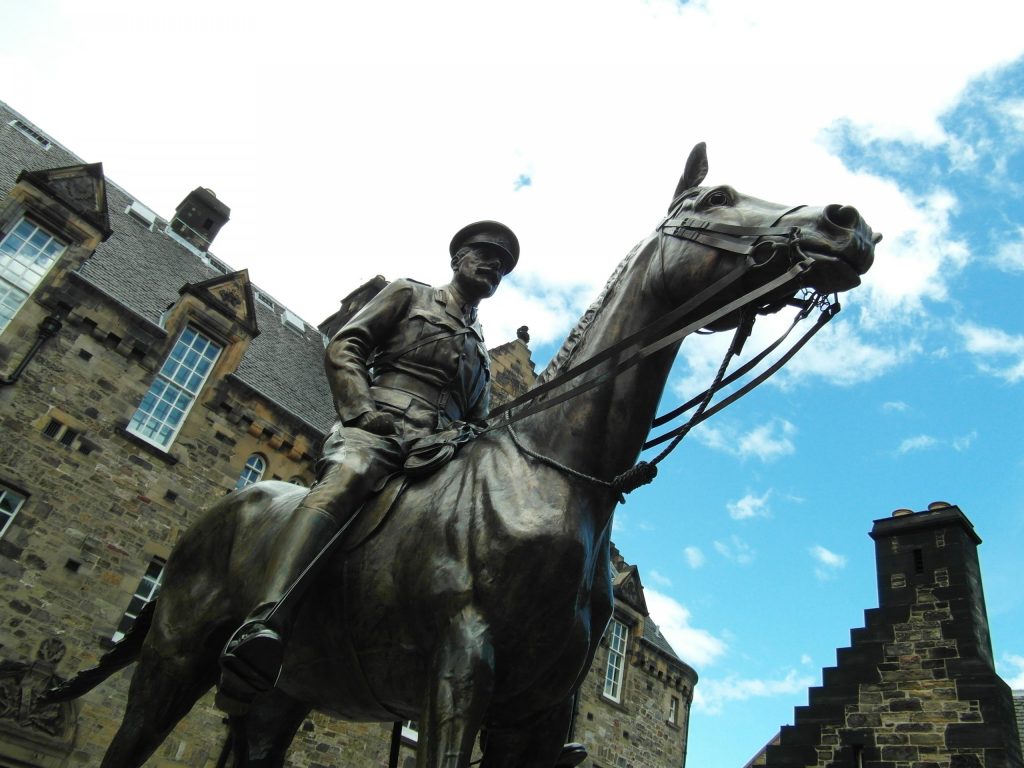 What followed was a gradual but not testing climb amid a riot of birdsong and vibrant greenery, the occasional jogger my only company. At Dunsapie Loch the map steered me towards a path and the ascent to Arthur’s Seat. I left the bike secured to a tree and continued on foot. The twisting flowing trail was in good order and after a substantial trek I arrived at Arthur’s Seat, the stark beauty and panoramic views took my breath away.

This is the highest point in the park and is a dormant volcano which sits 251 metres above sea level. After a lengthy rest surveying the city, I descended and continued onwards and upwards. I was following the Salisbury crags which are a series of 150ft cliff faces and again the views were superb especially of the city and the castle, lending its distinctive imprint to the skyline. I felt that I could reach out and touch the buildings, so captivating.

Once I had descended fully, I followed the road towards Duddington village which contoured the Loch, the sun dancing off the water. The village is a lovely quaint place and I stopped by the gate to the Manse. Pete from the bike shop was so passionate about a secret garden hidden from the roadway behind the walls. What a find, the mystical stillness was absorbing; the only sound was me clumsily negotiating the intricate lawns and flower beds with my cumbersome transport. Dr Neil’s garden (its official title) was a mass of floral delights, shades of vibrant colour and perfumes mixed seamlessly with stunning views and sounds of the neighbouring Loch. It’s well worth a visit especially for the tranquillity and complete isolation. A genuinely compelling experience. 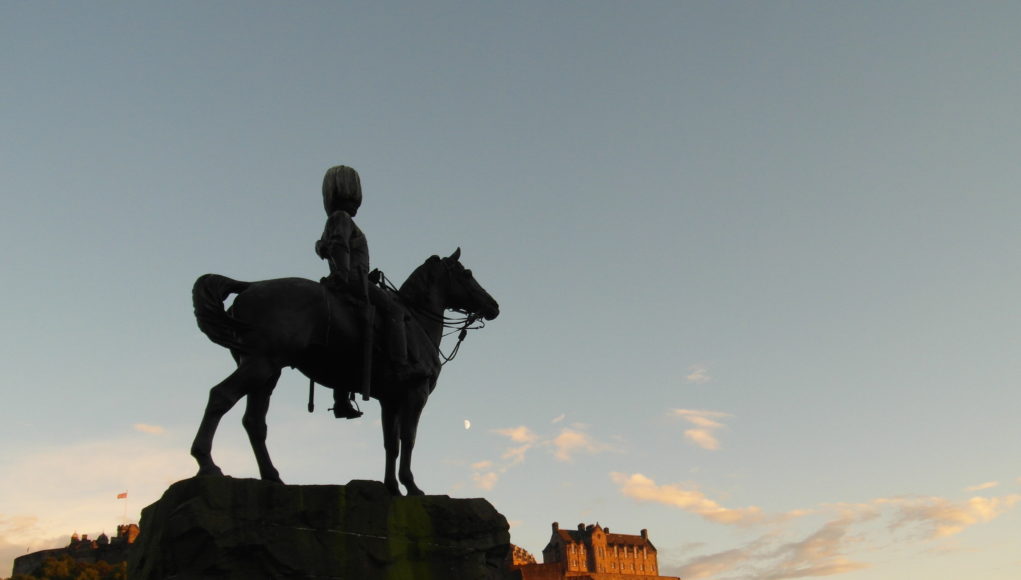 I reluctantly departed and was on the hunt for the ‘Innocent Railway’ a disused railway line which runs through the countryside back to the city. The path runs from the Newington/St Leonards area under Holyrood Park via Duddingston and Craigmillar to Brunstane in the East of the city and is part of the NCN route 1. It’s believed the Edinburgh and Dalkeith Railway (opened in July 1831) earned its nickname ‘the Innocent Railway’ due to its safety record.

It carried 300,000 to 400,000 passengers a year without any fatalities. The route took me through a wondrous green corridor, to my left was the soothing sounds of the Loch and my right was dominated by sumptuous views of Arthur’s seat, the volcanic rock ignited with the bright sunlight as it caught the reflection of the sun. All perfectly complemented by an abundance of floral displays evoking a wonderful summery feeling.

I then encountered the somewhat less inviting and slightly eerie surroundings of the tunnel (Pete had informed me that they even hold parties in this rather unwelcoming setting). The tunnel is 556 yards (518m) long, 20ft (6.1m) wide and 15ft (4.6m) high. The arched roof is lined with Craigleith stone and it was completed in 1829. It was one of the earliest railway’s tunnels in the world. Thankfully the route was fairly well lit and I made my way tentatively through the damp interior. Eventually I appeared into some glorious sunshine and headed towards the city centre. 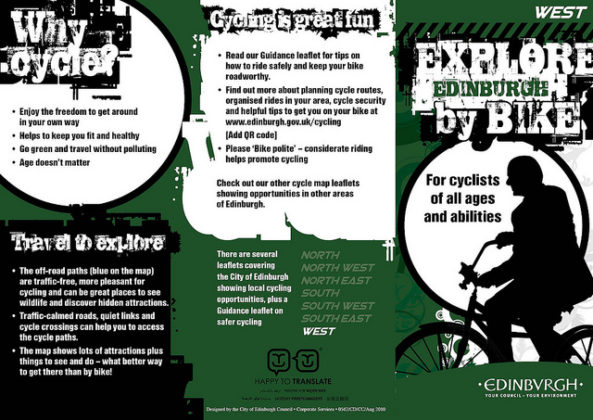 As I made my way up towards the castle, I was distracted by the passionate melody of the bagpipes which appeared to resonate from every street corner. The city is easily accessible by bike or foot, the tram service is excellent, convenient and cheap. The service runs from both the airport and the train station into the heart of the city. Cyclists are well catered for with a collection of on and off-road cycle routes which are well signed and well maintained.

After following several cycle paths, I reacquainted myself with the Royal Mile enroute to Edinburgh Castle. If I am being slightly critical, the road surface in and around the Royal Mile and just off Princes Street is considerably hard work due to the presence of cobbles (just ask Sarah, later in the day I tried to give her an impromptu backie, her bum will never be the same). This area is cluttered with chic artisan boutiques and cafes. The approach to the castle is stunning especially as you negotiate the grandstand that hosts the Military Tattoo. The queue to buy tickets was long and laborious but the castle and its museums were adequate recompense.

The laidback experience considering the crowds was welcoming and loads of fun especially the firing of the one o’clock gun which I found unexpected even though I was expecting it. The gun is fired as a time signal precisely at 13:00 every day, except Sunday, Good Friday and Christmas Day. It was originally established in 1861 as a signal for ships in the harbour of Leith and the Firth of Forth. The castle is a constant procession of museums dedicated to a collection of army battalions, the exhibits interesting and informative.

The location of the historic fortress sat on Castle Rock dominates the Edinburgh skyline and is now in the care of Historic Scotland. It’s the country’s most visited paid tourist attraction, with over 1.2 million visitors each year and provides a perfect snapshot of the City’s past