After a night on the ferry from Ancona, we arrived in Split at seven o’clock in the morning. Border control was still an easy one to go through, they checked our passports and asked for our telephone number and that was it – we were in the fourth country of our trip. We visited the city and got lost a lot, so we ended up in really interesting parts of the city. Probably not the touristic places but more like the ones where locals would warn you not to go. People were very nice and friendly and didn’t hesitate to indicate the right direction to follow.

As we were leaving the city, we cycled next to a beautiful beach and as the weather was nice and warm, we stopped there for a little rest. When we were back on the road following the coast down south, the wind started to blow and became stronger and stronger. The sun started to disappear, and it was time to look for a place to sleep. We found a football ground in a village and asked someone who was in the office there if we could stay there for the night. He was not particularly cheerful, but he accepted and that’s all that mattered at the time. The wind was so strong, the tent would fly away if we were not standing inside. It was one of our worst nights since the beginning of our trip. 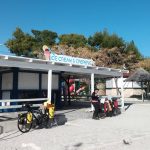 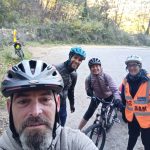 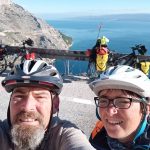 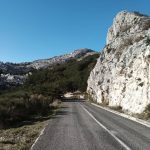 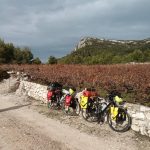 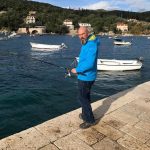 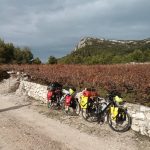 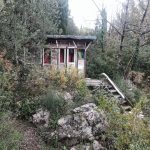 The next morning, the wind stopped, and we decided to leave the coast to go further inland. After nearly a month on flat ground in Italy, Croatia was another story. The hills and mountains were steep, but the scenery was still stunning. As we were approaching the top of a pass, we’ve met a couple cycling in the opposite direction with their dog in a trailer.

We stopped to have a nice chat with them, he was from France, and she was from Poland, and they were travelling through Europe in a campervan and with bicycles. Every time they stopped in an area, they discovered it by bicycle. We left them after probably an hour and a half, finished our climb and when we arrived at the bottom of the other side of the hill, we spotted a place by the river where we set up our tent and started a fire as the night was going to be really cold. It was only our second day in Croatia, but it was already feeling like a real adventure.

When we woke up in the morning, the tent was completely frozen, as was the water we had with us to prepare our breakfast. We decided then to get out of the mountain and re-join the coast to find better temperatures. We visited the lovely city of Makarska and cycled to Tučepi by the sea, and we found a beautiful beach to stay on for the night with a water supply nearby. The spot was so great, we stayed there for one more night just chilling and fishing.

After a nice day of rest, we were heading to Ploče, still following the coast. We went through a nice little village, met interesting people, like Emile, who was doing his daily ten-kilometre walk to keep him fit after he had heart problems. From Ploče we had to catch a ferry to go to Trpanj on the semi-island. The night before, we came across some beautiful lakes and thought it would be a great place to camp.

As we were ready to pitch the tent, an unusual thing happened. A guy came with his car, and without speaking to us, grabbed his rifle, his dog stole our bread and ate it. There were no apologies from the man as he was on his way to hunt. He came back ten minutes later, and we understood we were on his land. We asked him if we could sleep there, and he accepted and suddenly he became really friendly. He told us we could start a fire if it was too cold, he also explained to us he was hunting wild ducks and then he left as quickly as he arrived earlier.

The next day, we were at the ferry port, and we met a French family travelling by van – a couple with three kids. They were going on the ferry, so we spent the crossing chatting. On the ferry, we also met a Croatian couple who offered us some homemade Raki to keep us warm and away from Covid-19 as they said.

After an hour on the boat, we reached Trpanj and started our way down to Dubrovnik. At the end of the day, we met a winemaker in his vineyard, and he offered that we could put our tent on his land. The night was going to be really cold, so we had our dinner early and stayed inside the tent to stay warm. At about midnight, the police woke us up, asking what we were doing there. So, we explained to them we had permission to sleep there from the landowner.

They decided to check our passports, called immigration and suddenly they just handed everything over to us, apologised for the inconvenience and wished us a good night’s sleep and that we had nice travels in Croatia. There was a man with them arguing in Croatian, so we asked the policemen why they came in a middle of a vineyard at midnight with freezing temperatures to check on us. They replied they had a few troubles with migrants, and someone called them to tell them some people were sleeping in a field. Just to be a bit cheeky, we asked them if they have seen a lot of migrants travelling by bicycle and if the person who called them was the guy standing next to them. They smiled and decided to go…

Pantxika Goyhetche and Fred Lolliot are a french couple who lived in Chester U.K. for the last 7 years. In August 2018 they decided to make their first trip by bicycle from Chester to Hendaye in France using the Eurovelo 1 known as “la Vélodyssée”. As they really enjoyed this first experience they became obsessed to do an around the world trip. Kalimutxoworldtour was born which is the name of their two bicycles, Fred is riding Kali and Pantxika is riding Mutxo and after two years of preparation, they took off on Saturday 05th September 2020 from Ahetze, a small village next to Biarritz in France, for five years journey to cross as many countries as they can.

For the full article click here or get the print version