There’s a lawn gnome at the end of the cul-de-sac wearing an orange University of Tennessee cap and a tiny UT football jersey. This is Knoxville, Tennessee, so most of the lawn gnomes in this neighbourhood show a similar level of school spirit. The mid-sized southern city lives and dies by its SEC football team, so you’ll see more than a few UT lawn gnomes as you pedal through neighbourhoods full of small ranch-style homes.

While Knoxville might be best known as a college football town, a busy group of builders and riders are working to give the city a second identity as a mountain bike town by piecing together a massive system of single-track that winds through downtown’s suburbs. It’s called the Urban Wilderness, a patchwork of city and county parks, private land and wildlife management areas that offers 44 miles of single-track just a few miles south of the heart of downtown.

The in-town system has rapidly become the envy of the south, and it’s only getting better. Last year, Knoxville’s Appalachian Mountain Bike Club (AMBC) won a $100,000 grant from Bell Sports to build a downhill park within the Urban Wilderness. More than 26,000 people voted for Knoxville’s Downtown Downhill, earning AMBC the grant over several other strong contenders. 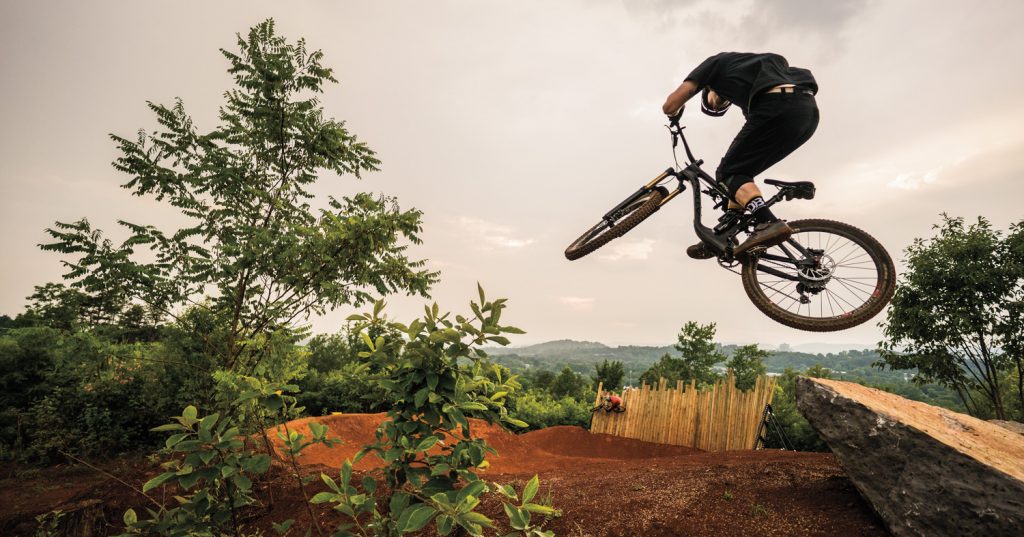 There’s more to Knoxville than just the Urban Wilderness. Sharps Ridge sits on the north side of town, with several miles of dry, technical climbing. Windrock, a private downhill park that attracts southern pros, is just a half-hour outside of town. Drive a little farther and you have the backcountry trails of Big South Fork, or head to the border of North Carolina and you’ll find a growing system in Cherokee National Forest. All in, AMBC maintains more than 120 miles of trail.

But it’s the systematic growth of Knoxville’s Urban Wilderness that shines the brightest. In the last five years, AMBC and Knoxville’s forward-thinking Legacy Parks Foundation have been able to secure land easements and purchase key parcels to complete a ring of single-track and public space on the south end of downtown Knoxville. The rate of trail building and maintenance has been staggering.

Soon we’re on dirt, careening down the flank of a bluff at the exact point where the French Broad River joins the Tennessee River. The trail drops quickly through a thick stand of skinny hardwoods, the trees forming a narrow corridor on either side of the single-track. It’s rocky terrain, but there’s nothing loose so you can throw yourself into the corners and carry speed over the patchy rock gardens. After a few minutes, the river is long gone and we’re deep in the forest.

Knoxville lacks significant mountains, but the trails make the most of the natural rise of the bluffs that run along the edge of the city’s rivers. The elevation changes are quick and frequent and rarely long enough to justify switching gears, so you stand and hammer the little hills, quickly getting into a paper-boy rhythm. The whole thing makes me feel like a kid again.

We’re knocking out a 12-mile ride called the South Loop that passes through all of the parks within the Urban Wilderness. Kellogg and most of the members of AMBC have been riding this loop for years, long before it was legal. Back then they called it the Dirty South because there were fences to hop and No Trespassing signs lining large swaths of would-be developed land. Fortunately for mountain bikers, Knoxville is a boomtown that never went boom.

Developers have bought and sold massive tracts of land around downtown with their sights on high-end neighbourhood developments, but because of Knoxville’s funky water table, it’s tough to get multiple water and sewer permits for large parcels. A number of large-scale developments never got off the ground, so hundreds of acres of wooded land sat undeveloped for years, enabling Knoxville’s Legacy Parks Foundation to bring key chunks into the public fold.

We detour off of the main loop onto a trail called AC/DC, which runs like an intestine through privately owned farmland. The trail plays out like a rolling slalom course–you can’t pedal three times before hitting another twist in the path. Eventually we hit a ton of lumber on the ‘seven bridges’ section of trail–seven wide, sweeping bridges over small creeks, one after the other.

Devil’s Racetrack makes the most of the 300 feet of relief within Baker Creek Preserve, starting with a corkscrew of berms right out of the gate. There’s an optional line from the top that takes a fall-line approach via artfully placed rocks and boulders: Imagine a dry creek bed with perfectly aligned kickers and drops.

You can roll all of it, but if you’ve got guts, you can go big through a wave of stone riddled with dire consequences. The main line down Devil’s Racetrack is a little more forgiving, but only because there isn’t much rock. It’s two minutes of sweeping berms, full-commitment gap jumps and mandatory drops. Carry speed and you can go full horizontal through the first series of berms. Then the tabletops kick in, each one inviting you to go bigger than the last.