After 109 years as an unchanged, five-featured event, multiple reports have indicated that the modern pentathlon is set to drop horse riding in favour of cycling. While it is not known what type of cycling event will be included, an official press release is expected tomorrow.

Modern pentathlon has been a core Olympic event since 1912 when it was invented by Pierre de Coubertin in an attempt to help cavalry riders to develop the skills needed to survive behind enemy lines. 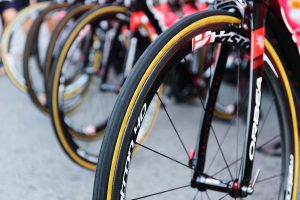 It comprises of five events; fencing, freestyle swimming, equestrian show jumping, pistol shooting and cross-country running. While it has been altered to take place on a solitary day as opposed to a five-day event, the core features of the pentathlon have always remained the same.

The Union Internationale de Pentathlon Moderne (UIPM) is aiming to preserve its status in the Olympics in the lead-up to the Paris Olympics in 2024 by replacing it with cycling, with fears its reputation may have been severely tarnished. This is largely due to German coach, Kim Raisner, appearing to strike a horse after it did not jump a fence on course during the show jumping event in Tokyo over the summer.

The organisation said, “As part of UIPM’s commitment to maintaining a strong, dynamic profile for modern pentathlon, a series of strategic meetings are being held. These meetings will include an upcoming call with national federations later this week. The outcome of these meetings will be detailed in a press release to be published on 4th November.”

Former British modern pentathlete Kate Allenby, who won a bronze for Team GB at the Sydney Olympics in 2000, told the Guardian any move to replace riding would be a “disaster” for the sport. “This needs talking about because it’s not modern pentathlon if it hasn’t got riding in it,” she said.

However another British Olympian Greg Whyte, who also won a world silver medal in 1994, said he could understand the change. “I don’t think it is necessarily a bad thing,” he said. “Back in the day, the fencing part alone used to take 14 hours, while in Paris the whole event will last just 90 minutes. All sports evolve, and no sport is immune from change in the modern TV era.”