Oudenaarde, Belgium – The heart of the Tour of Flanders

Brussels was my original destination but following the recent catastrophic events in the capital it was decided to change the plans, so Oudenaarde and Ghent would have the pleasure of my company.

I always find the ‘Eurostar’ experience a complete seamless joy, less frenetic than flying, more amiable and comforting. My weekend base was the modern confines of the Hotel Leopold. I was in good company as Team Astana where residing in my cycle themed boutique hotel. I met my guide Dries in the lobby, this suave looking chap was obviously a keen climber judging by his skinny appearance. He works for Visit Flanders predominately on their cycling initiatives and his focus is to promote the joys of cycling in the area, of which there are many (possibly the easiest and most rewarding job I know!).

First thing was to assuage my hunger, a delicious pile of ‘Spaghetti Boononaise’ in the CRVV brasserie awaited, I chuckled, even the food points to an obsessive cycling culture. The CRVV (Centrum Ronde Van Vlaanderen) is home to the Tour of Flanders Centre, it’s full of history about the legendary race. Dramatic displays detailing the highs and lows of the epic pedal, you can simply smell the history, feel the cobblestones, and re-live the pain and elation. An intense interactive showcase. It’s a great place to treat yourself to an original cycling gadget or vintage jersey in the gift shop. Interestingly you can register for a time chip and measure your own climb speed and compare your performance with the likes of Stijn Devollder, Jens Voight etc. The literature asks, ‘Have you got what it takes?’, easy answer ‘No!’. 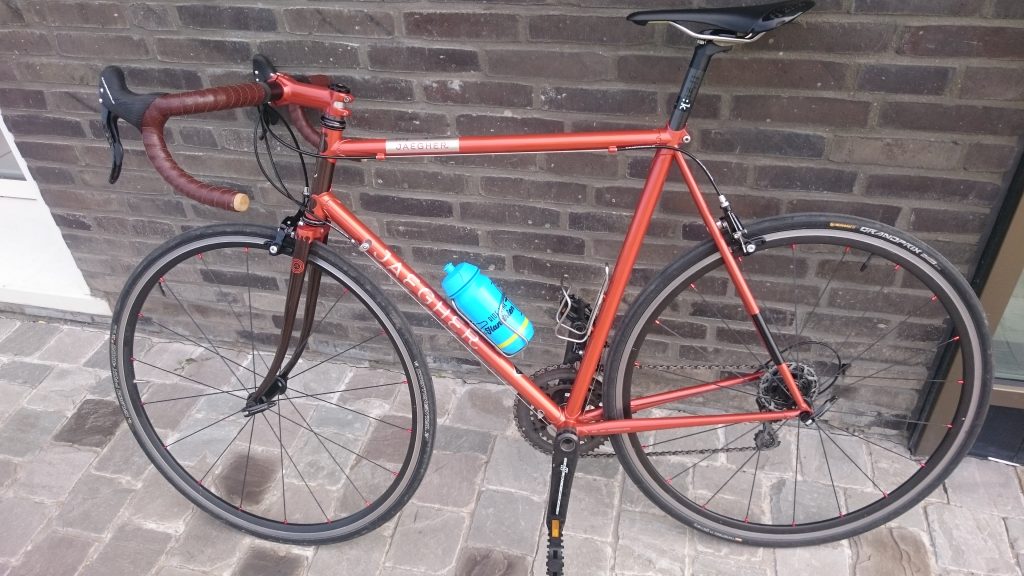 Bergs and Cobbles is the essential bike guide for the routes in the Flemish Ardennes. As Dries handed me my very own copy, a wave of apprehension and simple fear, engulfed me. The thought of hills mixed with cobbles and then throw in some wet stuff and I was having heart palpitations. I tried not to show it as Dries proudly detailed the 4 routes created by several tourist organisations and Visit Flanders. Spartacus, Bidon, Explorer and Bahamontes, all vary in length and difficulty. The longest route is conveniently named ‘Spartacus Route, chasing Cancellara’, in honour to the Swiss rider who has won the Ronde 3 times. The route follows a loop with 8 cobbles, 18 slopes and 2029 metres of climbing, and worryingly the murderous Koppenberg (that’s how the guide explains it), so can you know understand my restlessness?

Over dinner we discussed the next day’s riding, Dries was salivating at the prospect of the Koppenberg (locally known as the ‘Bump of Melden’) my enthusiasm was a lot less muted (I had injured my ribs before travelling, well that was my hopefully convincing excuse). Finally, we settled (or so I thought) on a sedate and leisurely ride through the Ardennes countryside and we agreed to meet late morning. As we departed, I could tell we were both hoping for a rain free day. In my room I had a quick flick through the comprehensive Bergs and Cobbles guide, the subsequent nightmares would be nothing in comparison to the actual Koppenberg, among others 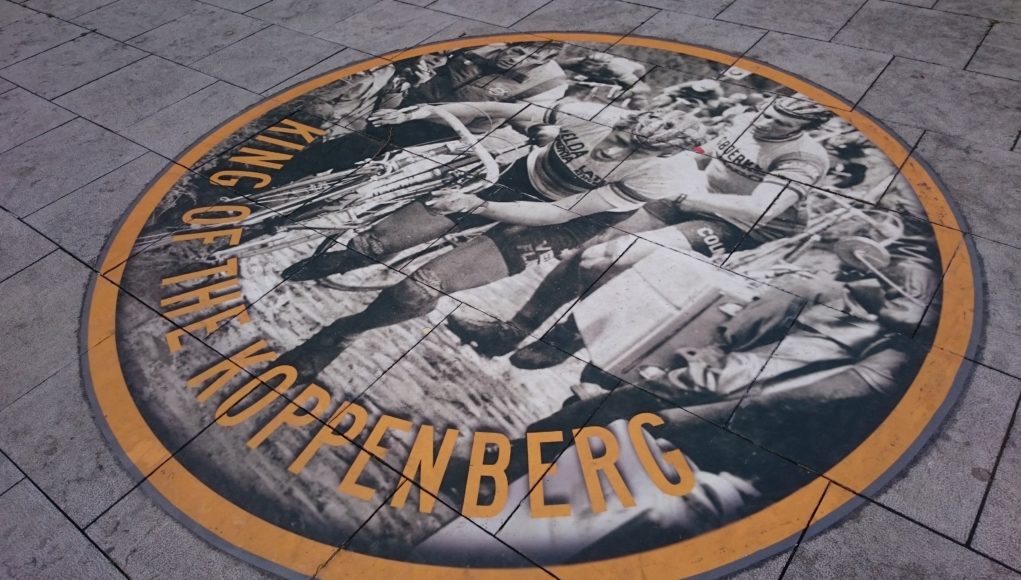 The next morning, I woke with my face stuck to the map detailing the Spartacus Route, was this an ominous omen? I had time to explore so I made the short walk to the centre, in and around Oudenaarde is a stunning backdrop to the Tour of Flanders (Ronde van Vlaanderen). The town is a complete cycling nirvana, the greatest concentration of lyrca clad, and carbon exponents anywhere in the world I have experienced. There are plenty of bars, restaurants and shops, most dressed in cycling paraphernalia

A steel framed bike had been organised for me, the stunning lines of the Jaegher were beautiful, and I was immediately in love. Even though the brand is actually new, the firm has been producing frames for four generations with its riders including Eddy Merckx, Freddy Maertens and many more. They had a very popular reputation following WWII and started producing bespoke racing bikes and are now world renowned for their steel frames.

Thankfully any chance of rain was slim, and we set off in good spirits from the Hotel Carpark, co-incidentally so did Team Astana, maybe we could form a small peloton, actually maybe not, would have been their obvious rebuke! We headed south out of the Oudenaarde, the Jaegher was a delight, its light construction and delicate feel were more than I was expecting or usually exposed to.

The countryside is a beautiful a mix of farmer’s fields with a sporadic well-presented house. I had read that approximately 60% of households in Flanders own two or more bikes and ride a collective 8,500,000 kilometres daily. This was immediately evident, as we passed a succession of riders, as well as a procession of speed merchants abusing their pedals as they breezed past us in a blur. My philosophy is simple, cycling has to be enjoyable with exploration and discovery key, an unexpected view or a hidden gem are so satisfying and unquestionably beats the need for speed and distance. 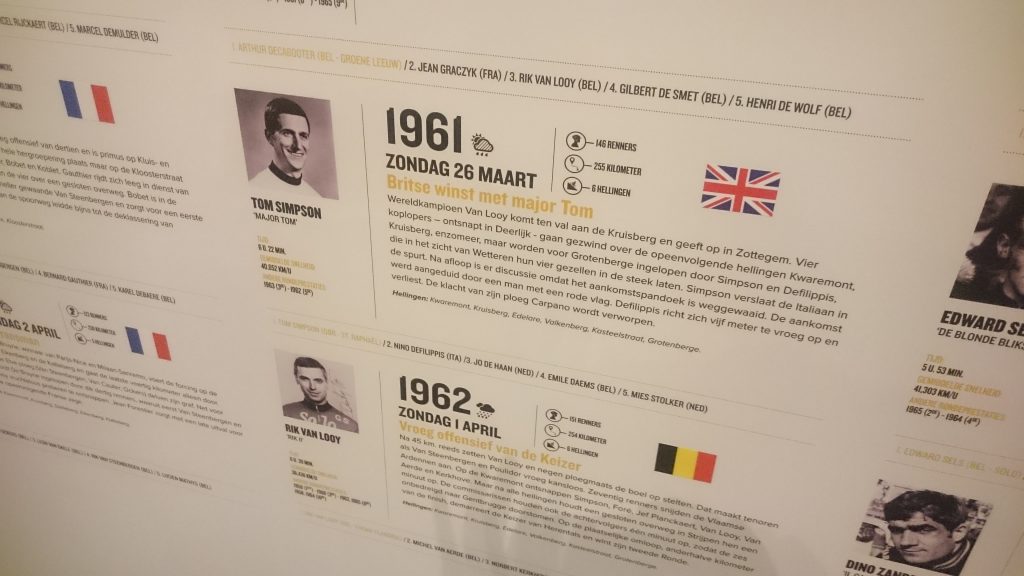 After several kilometres of gentle pedalling, Dries suggested flaunting me the start of the Koppenberg, suddenly my late-night reading and the descriptive words ‘Murderous’ occupied my mind. I reassured myself that I did not have to succumb to any form of cycling peer pressure. However, the sight of the start was rather innocuous and deceptive, so foolishly (and rather naively) I agreed to give it a go, partly as I was intrigued and also, I didn’t want to disappoint Dries, who was clearly passionate and proud of this 0.62km of cobblestones. The only positive was it wasn’t raining, the climb started gradually, and my misplaced confidence increased. This was brief as the cobbles pushed me from side to side, my speed negligible, I had completely forgot the advice Dries had rightly given me, to sit hard on the back of the saddle, and proceeded to stand to gain forward momentum.

This had the opposite effect, the cobblestones reverberated through my body, and every muscle shuddered in disbelief. The inside shoulder of the steepest section is at an incline of 25%, understandably any reserves of strength were fading. After a brief halt (I know!) I pushed on, with my now heavily massaged butt firmly fixed to my saddle. To compound my embarrassment, as I neared the top a 60+ years old gent sped past me with ease. I consoled myself with the fact that I looked more flattering in Lycra as he continued over the top and off into the distance.

Next up was a detour onto dirt tracks, our wheels groaned and salivated with the prospect of some off-road fun, we were in search of Oude Kwaremont. We negotiated a messy selection of puddles and ruts before a cobblestone encore followed. The Kwaremont is the infamous location of Eddy Merckx 104km break away from the finish line at the 1975 Tour. Without hesitation I purposely pushed down on the pedals and the saddle (I had remembered) and took on the ascent with vigour, the experience was as expected, buttock numbing, but I had learnt and with the correct technique in place I managed to reach the top in reasonably good physical condition, was this Flandrien air having an effect? 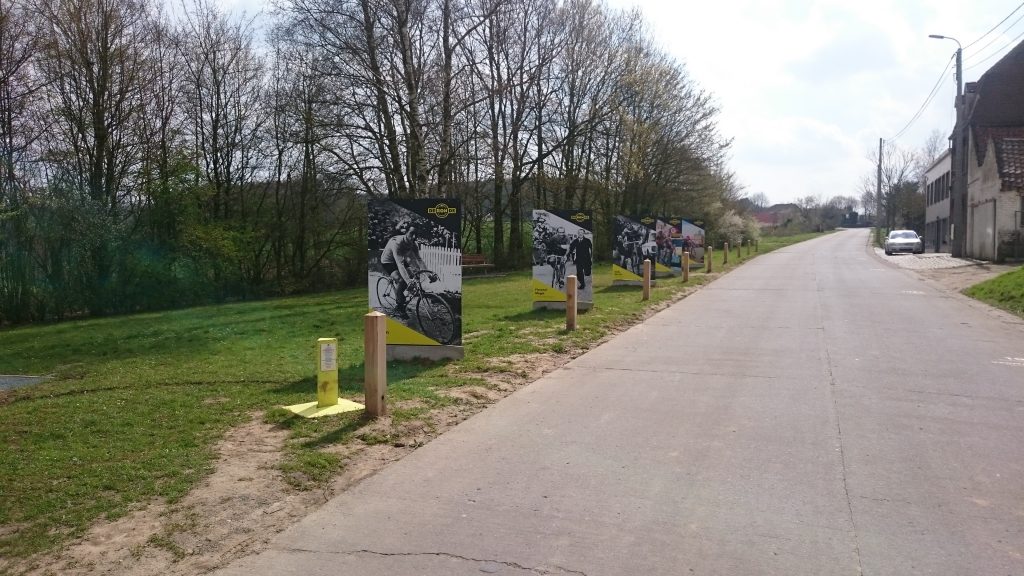 Thankfully after the gruelling Koppenberg and Oude Kwaremont several speedy gratifying descents followed along a busy roadway, next stop on our supposed (sedate) pedal was the Ronde Van Vlaanderenstraat (Tour of Flanders Street) where we met Karel Van Wijendaele, well not the man himself but his memorial. Karel was one of the founders of modern reporting on cycle races and the Tour of Flanders. It was a poignant moment; this simple innocuous structure is accompanied by images of previous winners of the Ronde set sporadically into the cobblestones.

After tracking down the infamous Tommy Simpson and paying a pathetic homage, we continued along the roadway. This unassuming street hides a multitude of cycling goodies, the tarmac adorns the names of every victor, and a collection of images of riders displaying the commitment and determination required to successfully become immortalised in the Flandrien countryside. Just several revolutions later and we arrived at the d’ Oude Hoeve restaurant, it was a rather appropriate spot to rest and have some refreshments, to be honest the whitewashed exterior was a welcome overdue oasis. The interior was unexpectedly cycling dominated, especially the beer infused chocolates packaged with two wheeled insignias. The welcome and conversation was typically Flemish, a roaring fire and a mass of smiling faces making a weary Lycra clad idiot (me) feel at ease and part of the ubiquitous fixtures and fittings.

After our brief halt, we reluctantly departed and stumbled on the U23 Ronde as it negotiated a junction in eyes shot of the restaurant. In a blur of metallic vehicles and coloured jerseys, the peloton had breezed effortlessly past and into the depths of the countryside. 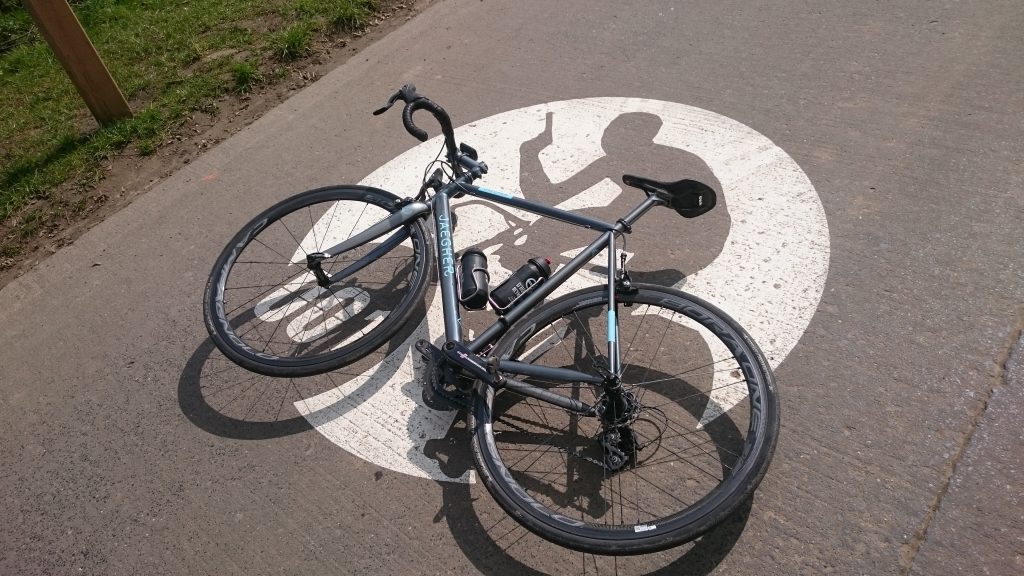 Dries’s last task was to decide on a route back, Ponstraat, a disused tarmacked railway line was more than adequate. It gloriously hugs the contours of the Scheldt River and was deserted, with only the occasional interaction with other riders, more importantly it was flat! It allowed us to converse about the joys of the Ardennes and the endless highlights for cyclists. In no time we fluently entered the outskirts of Oudenaarde. We had beat Team Astana back, however I think their day was to be considerably longer and more of a test of stamina and skill than my dismal attempts at two of the World’s iconic climbs.

Next on the itinerary was Ghent, unfortunately my exposure to the cobbles had exacerbated my side pain (on my return my doctor confirmed I had cracked 2 RIBS, ouch!) so my introduction to this beautiful city would have to wait as I resigned myself to the confines of the train station and a mass of strong painkillers.

Once again, I am holidaying somewhere familiar. I wouldn’t like to think of myself as a completely predictable pack driven individual but from past…

Lake Balaton is one of the best thing what you can find in Hungary. Balaton is the largest lake in Central Europe and the…

Experience a once in a lifetime trip along Italy’s beautiful Lake Como on two wheels this summer.   With the long winter slowly falling away,…

Any ride is a good ride in our book, We love the simplicity of exploration on two wheels, regardless of the weather. With this… 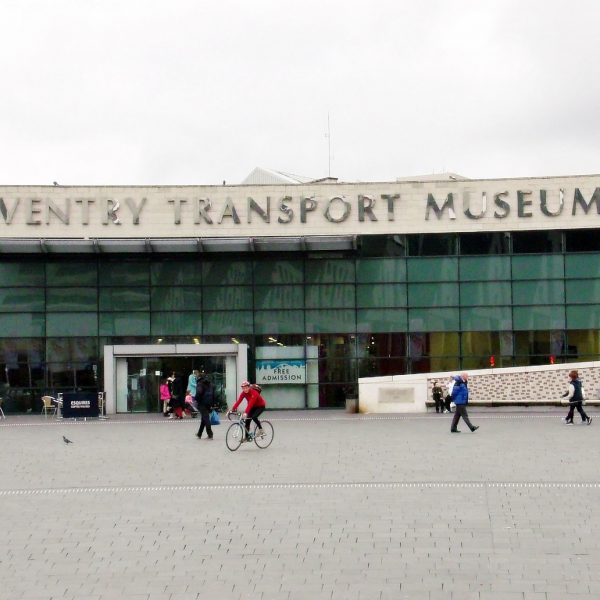 Wild Atlantic Way New Year’s Day is always an anti-climax, all the partying of the festive period (which invariably lasts at least a week)…

France in the Summer means one thing, the Tour de France

As soon as you cross the channel you are overwhelmed with the euphoria generated by the iconic brand. For three weeks the sporting World’s… 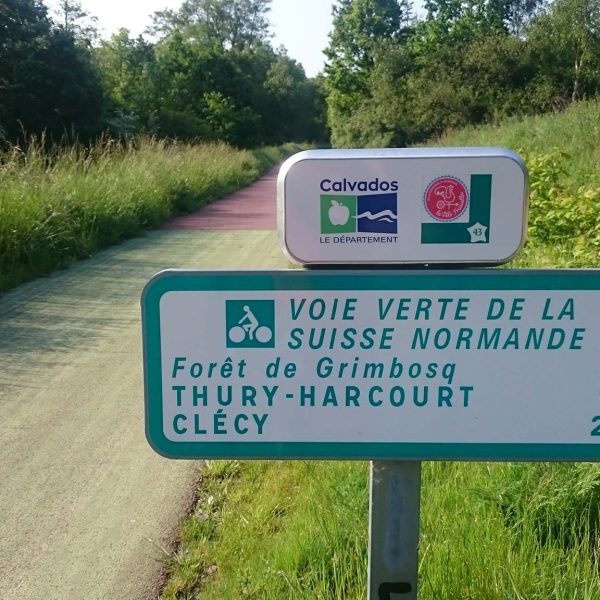