Northwest France is dominated by some beautiful towns and villages and the Bretagne coastal town of Carnac, Brittany, is no exception.

The area is acknowledged worldwide for its collection of stones: thousands of prehistoric standing stones spread across three alignments: Ménec, Kermario and Kerlescan, and the place has so much more to discover for the adventurous amongst us.

Brittany has a rich and diverse history; the indigenous people of Bretagne consider themselves descendants of the Celts; they possess a very hospitable and cheerful nature. They are extremely patriotic and treat their national culture with great respect. The language, called ‘Breton’ and originating from the Celtic language, still accounts for between 250,000 and 500,000 speakers, some among the older generation and some of the younger. Bilingual (Breton and French) road signs may be seen in some areas. The recent influx of English-speaking immigrants and second-home owners in some villages also adds to the linguistic diversity. 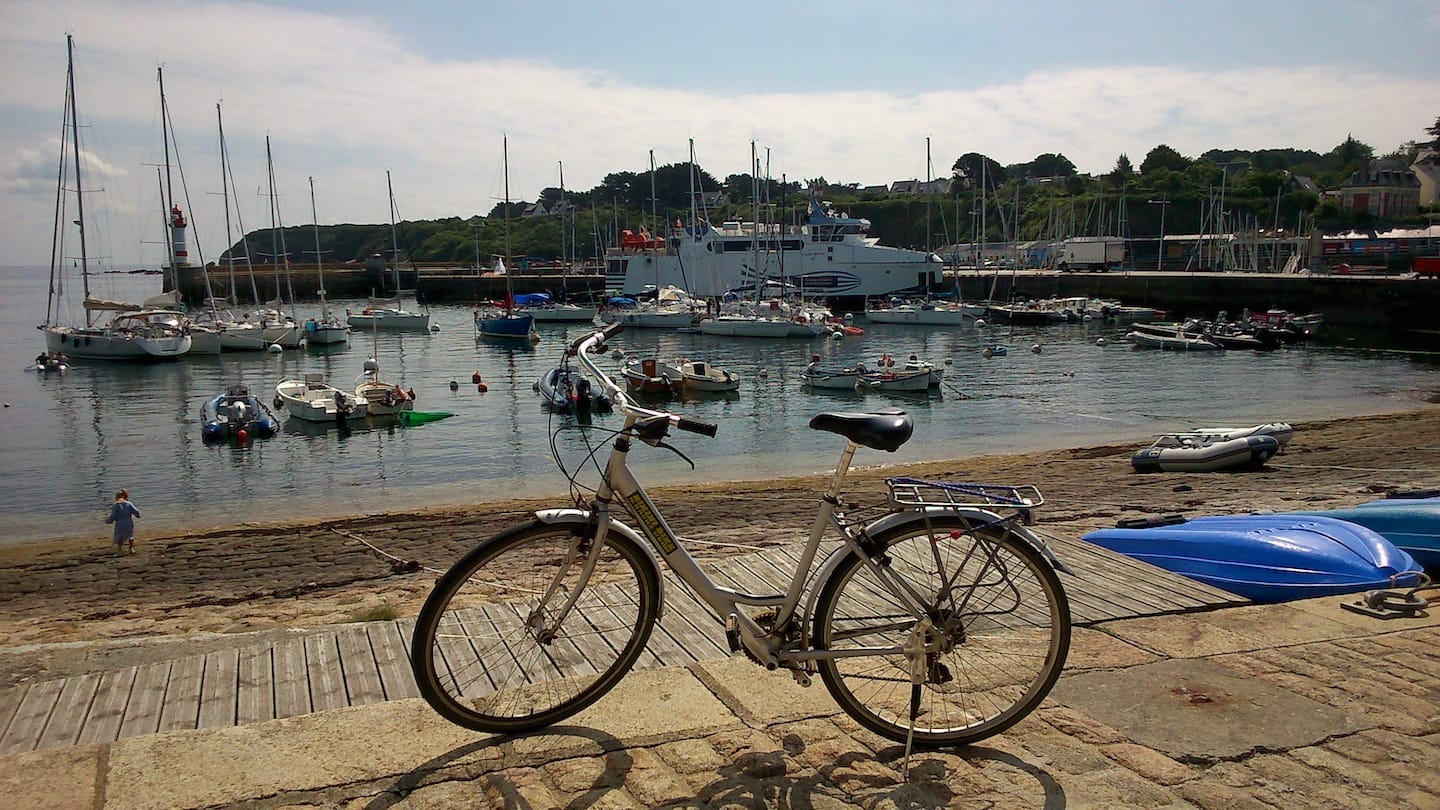 The plan was simple: me and the family will explore the area by bike. Cycling here is a true pleasure, with good toll-free roads and very light traffic in the countryside. Two wheels are especially popular in Brittany, with five-times Tour de France winner, Bernard Hinault, a local inspiration for competitive riders.

The most vivid memories of my childhood consist of vibrant sunshine, the family and the freedom of a bike. There really is no better feeling than riding along in the warm of high summer with your children alongside you. However, it does come with its complications, regardless of age. Water is an important necessity, it’s essential to keep hydrated and more so in the warm weather.

We were staying not far from the huge sea lagoon of the Gulf of Morbihan at La Grande Metairie (route Des Alignements De Kermario, Route de Kerlescan, 56340 Carnac; +33 2 30 26 02 29), which is conveniently located in mature woodland, just on the outskirts of the town of Carnac.

They have so much to discover, an on-park petting farm, a superb pool complex complete with lazy river and waterslides, and the mysterious Kermario standing stones guarding the park’s entrance. For the energetic, you can try your luck at archery or whizz down the zip wire, while your kids hone their juggling skills at the circus school! When it’s time to explore beyond the park, it’s only a few miles to the coast, meaning that great beaches and a range of water sports are just on the doorstep, too.

The weather was glorious as we set off on the short pedal ride to Carnac’s world-famous attraction, its unique rows of ancient standing stones. Three fields, Ménec, Kermario and Kerlescan contain around 3,000 aligned megaliths, which date from 4000BC, substantially older than Stonehenge. The granite stones were erected on the spot where they were dug, hence the differing sizes, although it is not known why they were put up; it is thought they had a religious or cultural significance.

It’s unsurprising that they are the source of numerous legends, my favourite being that they are the soldiers of a Roman army, turned to stone for threatening a Christian saint, and they leave their holes at midnight on Christmas Eve to drink at the River Crac’h, leaving exposed treasure that the very brave may try to retrieve.

From megalithics to typical rural France at its best, the beautifully time-warped town of Carnac is only an easy ride away and is easy to explore on foot or by bike, thanks to the creation of a selection of well organised hiking/biking routes. The trails are a manageable 7-15km long and whichever you choose, you will discover the treasures of the area. As well as the alignment of stones there are an abundance of oyster-farming sites, sandy beaches and architectural and religious delights. Conveniently, the departure of all trails is at “Place de leglike” near the Tourist Office and can be downloaded in PDF or GPX format.

The best and most interesting tour takes you to the part of the town where all the megalithic monuments are to be found. Passing below the tumulus of Saint Michel, with the evocation chapel sat above, surveying its surroundings like a proud head-teacher. A narrow road leads to the Saint-Michel fountain, a place of worship and pilgrimage. Next, pass through the charming village of Cloucarnac and climb up the hill to the fabulous standing stones of Kermario, 1200m of length with 1029 stones. Before arriving at the site of Menec to the north which is the most representative with 1099 stones, the largest are more than four metres high.

Further afield and we recommend a trip to the I’le de Groix with its deserted lanes; here everywhere is dominated by the bicycle. The perfect place to hire bikes is Bikini Bikes (Port Tudy, 56590 Groix; +33 6 41 51 13 01) some 50 metres from the Lorient ferry arrival point.

i’le de Groix is 4.3 miles (7 km) long by 1.8 miles (3 km) wide and is Brittany’s second largest island after Belle-Île and lies 8.7 miles (14km) off the coast of Lorient. Once a major centre for tuna fishing, Groix is now noted for its lovely (and unusual) beaches and its important concentration of minerals. There is a well-established cycle/walk trail which allows you to explore every isolated inch of its beauty.

In total the 25 miles (40km) of cycle paths will take you over moorland, alongside ancient megaliths, past the soaring cliffs of the Trou de Tonnère (thunder hole) and the Trou d’Enfer (hell hole) to hidden coves and beautiful sandy beaches. We immediately felt at home, helped by the lack of cars and the welcoming locals, on several occasions we were even greeted with a chorus of ‘bon-appetit!’ as we munched on our lunch in the shade of a local church.

While here we also suggest an exploration of the ocean with Nautik Experience (Avenue surcouf, 56510 Saint-Pierre-Quiberon; +33 6 95 38 80 14) who are located in Plouharnel/Saint-Pierre-Quiberon and offer paddle-boarding, kayaking, rafting, pirogue, surfing and sand yachting, all overseen by qualified state instructors.

C’mon who has not dreamed of going around several islands standing on a board with the ocean lapping at their feet? The Gulf of Morbihan is the perfect location to experience those satisfying, paddleistic impulses. They have even created a specific branch named ‘Paddle Experience’, which specialises in initiation sessions in Brittany.

We had been booked on a session of stand-up paddle boarding, or in my case kneel-boarding, with the occasional exploration of the Cote Sauvage. Our guide, Pierre, was a proud Breton, his enthusiasm was infectious, matched by his knowledge of all-things marine life. Most importantly his patience was commendable, it had to be!

So why Brittany? There are so many positives to cycling in the region, it’s criss-crossed by eight major véloroutes and greenways, taking you through glorious, unspoilt nature and character-packed towns. All these cycle paths are safe and comfortable, following rivers and canal towpaths, disused railway lines, or quiet lanes hugging the coast – with over 1,700km of well-laid-out cycle routes.

Throw in a land of prehistoric mysticism, proud tradition and culinary wealth, where fiercely independent locals celebrate Breton culture and Brittany should be on top of your list to expand your holiday memories.

For more info see brittanytourism.com for a one-stop resource for anything Brittany related.

Excerpt from BIKE Magazine, click here to continue reading the full article or get the print edition