Ineos Grenadiers rider Egan Bernal was training with his teammates in his native Bogota, Colombia on Monday and collided heavily with a parked bus.

The 25-year-old suffered substantial injuries as a result, and was admitted to the Clinica Universidad de La Sabana where doctors diagnosed traumas to his chest, spine, and lower limbs. Despite this, he is conscious and stable, and will now have to undergo surgery on Tuesday to deal with the vertebral and thoracic trauma.

Reports in Colombia said Bernal had struck a parked bus while riding at high speed close to his home in Bogota, with images showing the Ineos Grenadiers rider receiving treatment next to a heavily-dented vehicle.

The former Giro d’italia and Tour de France winner is believed not to have broken any bones, but a statement released by the hospital where he is receiving treatment confirms the Colombian has suffered a multitude of injuries which require urgent medical attention.

“The Clinica Universidad de La Sabana can publicly inform that Egan Bernal was admitted to the emergency unit this morning via an ambulance,” read the statement.

“At that moment, he was examined across the board by specialists. In light of the findings, he must undergo surgery in the coming hours due to multiple injuries: vertebral and thoracic trauma, blunt trauma of the thorax, musculoskeletal trauma, and trauma to the lower limbs. For the moment he is haemodynamically stable. We hope for the best in his clinical outcome.” 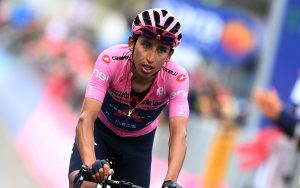 Bernal was due to kick off 2022 with the Tour de la Provence on February 10 before moving on to the UAE Tour starting on February 20. Although there is no time frame given for his road to recovery, it is likely to interfere with Ineos Grenadiers preparations for the summer when the WorldTour starts to intensify.

It is likely that Bernal would have led the team at the Tour de France, with the Colombian widely touted as one of the favourites to clinch the title alongside rivals Tadej Pogacar and Primoz Roglic.