Yesterday’s press conference at the Misano World Circuit marked the countdown to the fifth Italian Bike Festival, which takes place from September 9th to 11th. Aside from the official presentation of Misano as the IBF 2022’s new venue and the official opening of registrations for the event, a list of facts and figures were also revealed that demonstrate the expo’s exponential growth since its first outing in 2018.

The IBF organisers are now focusing their efforts on internationalising the event which is also collaborating with and enjoying the support of APT Servizi Emilia-Romagna and Visit Romagna.

It’s not just another exhibition, but a genuinely international bike and alternative mobility show.

This was the message that came out clear and strong from yesterday’s press conference at the Misano World Circuit during which the organisers presented the fifth edition of the Italian Bike Festival. This year’s edition from September 9th to 11th and continues to extend its international reach.

The show’s exponential growth since its first outing in 2018 also prompted the IBF to move to a new internationally-renowned venue, the Misano World Circuit, home to a slew of world class sporting events

In his opening speech, Andrea Albani, director of the Misano World Circuit, declared, “The Italian Bike Festival will be an extraordinary success. I am convinced of it. I know the event well and I am certain that being staged in the open and controlled spaces of a circuit framed by the sea and the stunning Valconca will have a major influence on that success. There isn’t just huge energy buzzing here every day at the Simoncelli Circuit, there’s also innovation and talent too.

The whole racing environment will also fuel the passion of the competitors in the Granfondos. I believe that the superb success of the Rimini editions of the Festival will receive a further powerful boost from an area with a vocation for hospitality and the ability to organise international events on the largest scale.”

The team from Taking Off, the company organising the Italian Bike Festival, also ran through the main milestones achieved and the goals for the future of an event that embraces the full spectrum of the bike world.

The preliminary data from the 2022 edition highlight just how much the IBF has grown too. Launched in 2018 as an event aimed solely at consumers, the Festival’s visibility has grown rapidly in the interim with visitor numbers booming and the business side evolving too. A total of 20.000 visitors came to the first edition, but this year it is expected the IBF will attract an even higher number than the 30.000 bike fans that poured through the turnstiles last year.

“Our event has a major impact on the local area, a fact attested to in a report compiled by Trademark Italia for the Osservatorio sul Turismo dell’Emilia-Romagna” commented Fabrizio Ravasio of IBF organisers, Taking Off  “That research reveals that the 2021 Italian Bike Festival had an economic impact of 5.13 million euro in the local area, a third of which was spent on hospitality such as hotels, B&Bs and apartments.”

In addition, the IBF has also gained a reputation as a meeting place for sector operators, becoming something of a B2B event for the segment. In fact, a significant number of brands are now choosing to attend, confirming the breadth and value of the show.

“In the first edition, we had a hundred or so exhibitors that that trusted us, but now we already have over 400 Italian and foreign brands confirmed for this fifth outing” pointed out Francesco Ferrario of Taking Off “This growth trend is a testament to the role the IBF has carved out in the bike world, presenting itself as a touchstone for those in the business and professionals for whom it really has become unmissable.”

This year the latter will be welcomed by over 80.000 square metres of space at the Misano World Circuit, 50.000 of which will be given over to stands and displays with the remaining 30.000 dedicated to the tests and side events planned for the entirety of what promises to be an unforgettable three-day run.

The 2022 Italian Bike Festival 2022 is receiving a very warm welcome from its Adriatic municipality host: “Aside from the satisfaction of adding another gem of an event to our calendar for the coming months, we are also convinced that the IBF has come to an area that is the perfect fit for its mission.” said Fabrizio Piccioni, mayor of Misano Adriatico,

The thousands of people coming here for it will also be able to give vent to their passion for cycling by trying out the Ecovie (eco trails) we have laid out and the routes suggested by the organisers. Misano loves bikes: we like faster, more adrenaline-fuelled ones, but we are absolutely crazy about the ones linked to the stunning environment around us. I’d like to extend a very warm welcome to the town of Misano Adriatico to the IBF.” 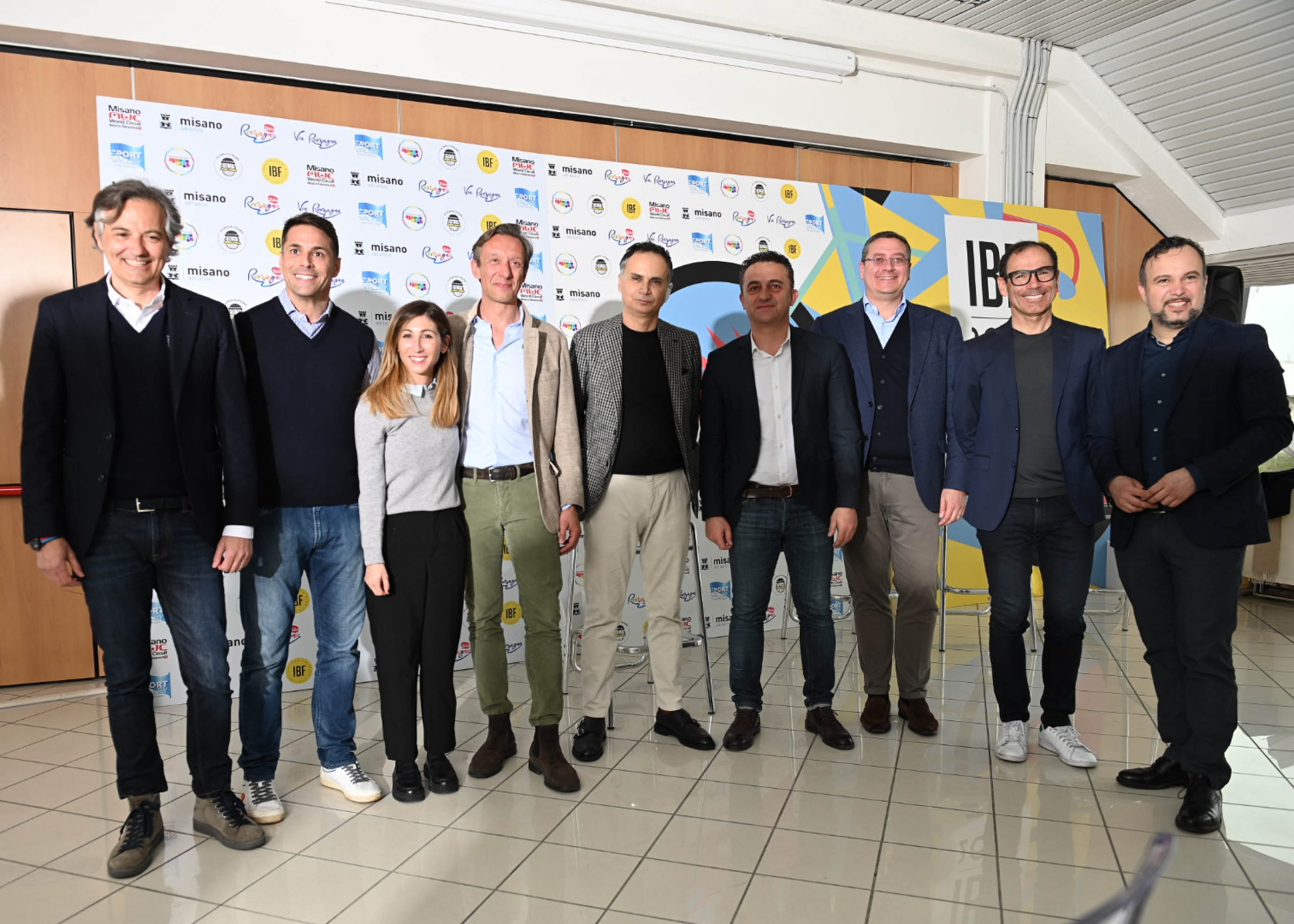 A further indication of the IBF’s growing status within the bike industry as a whole, is the fact that on Thursday, September 8th, the event will play host to the General State of the Bike: “It’s an event within an event that we are very proud of. It is only for people in the business and for some very special guests who will speak and guide the discussions” explained Lucrezia Sacchi of Taking Off “Our goal is to draw up an official document to present to the government that will summarise four key areas: the Bike Economy, Smart City, Lifestyle and Sport”

The fifth IBF looks set to be an international catalyst as it also hosts the first edition of the European Media Cycling Contest (EMCC). This will see over 50 bike journalists, bloggers, influencers and YouTubers from all over Europe enjoy a packed schedule of events designed to help these all-round bike world communicators discover Romagna. Naturally enough, they will also have the chance to take part in the La Gialla Cycling races, to compete in the first edition of the EMCC 2022.

However, one of the IBF’s greatest strengths is its partnership with APT Servizi Emilia-Romagna. “This year, various consortia from the food and wine and local area sectors will be involved, and this will further highlight the tourist and cultural value of the surrounding area.” explained Davide Cassani, president of Apt Servizi Emilia-Romagna  “This partnership with various tourist entities is especially promising because bike touring is becoming so popular. In fact, Italy and Romagna, in particular, are up there on the podium as ideal destinations for a growing number of European bike tourists.”

Tellingly, the fifth IBF is also actively highlighting bike tourism through IBF – Tourism, an entire 2.000 square metre section dedicated to bike tours. Chiara Astolfi, Head of Visit Romagna, was keen to stress that Romagna is ideal for bike tourism: “Visit Romagna sees the IBF as the perfect venue to showcase Romagna Bike’s tourism offering with its specialist bike hotels, itineraries, services, events and new opportunities. One being the permanent Via Romagna route, an itineraries-focused project designed for bike tourism in the inland areas of Romanga where there are huge opportunities, they will definitely be keen to embrace.”

As already mentioned, the IBF will have a huge impact in terms of tourist promotion: “The Italian Bike Festival at the Misano World Circuit Marco Simoncelli brings together two of Italy’s areas of excellence: on the one hand, we have one of the main tourist attractions in our region, a go-to for lovers of fast cars and motorbikes, while on the other, we have Italy’s largest 360-degree bike event” concluded Andrea Corsini, Regional Councillor for Tourism “That is a very successful duo and means a further leap in the quality of the festival which has grown year-on-year here in Romagna. An event like this which attracts thousands of enthusiasts also adds great life to the Romagnola Riviera’s September.”

Last but by no means least was the announcement that visitor registrations for fifth edition of the Italian Bike Festival are now officially open. “We can’t wait to count the first numbers” concludes Lucrezia Sacchi of Taking Off  “Thousands of visitors are waiting for the event with bated breath – confirming that the IBF has improved and become more popular with every year.”

Entry for the public to the IBF is free but you must register first.